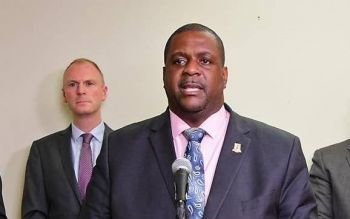 Governor's Office a 'symbol of discrimination & injustice' to VIslanders - Premier

Reiterates call for a Virgin Islander to hold post of Governor

Premier and Minister of Finance, Hon Andrew A. Fahie has reiterated his calls for a Virgin Islander to be holding the post of Governor instead of a UK appointed native.

Hon Fahie made this call during the 13th Sitting of the Second session of the Fourth House of Assembly (HoA) yesterday, July 27, 2020, during the start of the debate on the VI's long overdue constitutional review.

Even as the VI is self-governing, he said "an unelected Governor is still appointed by Her Majesty the Queen, who presides over a Cabinet composed of a Premier and Ministers who have been duly elected by the people of the BVI to represent them."

The Premier said the appointment runs counter to the rights of free people to govern themselves in a democratic society, with the Governor even retaining powers to intervene into the affairs of the Territory.

"There is inescapable friction in our constitutional arrangements, in which the democratic will of the people of the Territory runs against the monarchial authority of the Governor appointed by the UK."

The Leader of Government Business said in order to shape the Territory's destiny, the constitution should be in the best interest of the people.

Constitution does not stop VIslander from holding post - Premier

Referencing Chapter 3, Section 35, of the Virgin Islands Constitution Order 2007, Hon Fahie said there is nothing in the order under the appointment of the Governor, that stipulates the post cannot be held by a Virgin Islander.

He said the points about the Governor referenced is not about independence, rather, about self-governance under the current constitutional arrangements as a matter of principle.

According to the Premier, while there are Virgin Islanders who qualify for the post, having been career public servants, innovators of industries and scholars with high-level college education throughout all generations of the Territory, there is no one in the VI deemed acceptable by the UK to hold the Governor's position.

He called the Governor's Office a symbol of discrimination, oppression and injustice against Virgin Islanders, starting with the youngest child, whom he said cannot achieve the highest office in the land of their birth regardless of how hard they study and work.
Add Comment