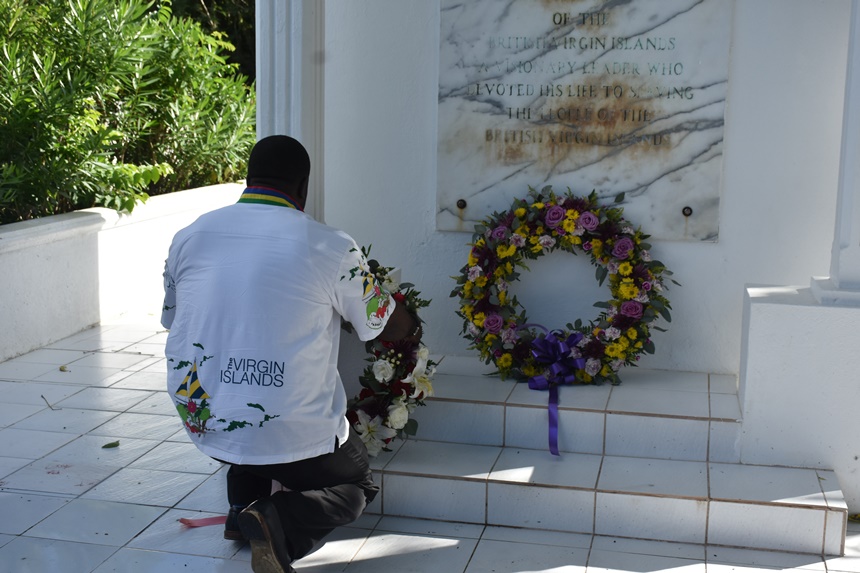 Government members, educators and members of the public today honoured the late Hamilton Lavity Stoutt at a Wreath-laying & Commemorative Celebration.
This year marks the 26th anniversary year of his passing.

Stoutt was the first and longest-serving Chief Minister of the BVI and is largely credited for the development of the BVI’s education system.

Speaking at the commemoration ceremony, Premier Andrew Fahie hailed Stoutt as a visionary and reminded residents that the late leader faced opposition from local and international critics when he dreamed of building the community college.

Premier Fahie said today’s elected representatives are faced with similar opposition as they aim to advance the BVI.

“Some got groups together in an attempt to stage a protest to lie down in front of the bulldozer to prevent it from levelling the grounds at Paraquita Bay (HLSCC campus), let us not forget,” Premier Fahie expressed.

He continued: “All these unjustified and irresponsible statements echoed from the bench of Her Majesty’s Loyal Opposition at the time, with the exception of Honourable Omar Hodge. Most people joined in opposing just for opposing sake. My, my, my, the more things change, the more they remain the same.”

The Premier also urged BVIslanders to emulate the passion of Stoutt as they pursue individual and national ambitions.

“Never abort your purpose! Generations unborn are waiting on you to fulfil your purpose!” Premier Fahie said.

At the time of his death, Stoutt was thought to be the longest-serving parliamentarian in the Caribbean. He was also a founder of and the leader of the United Party and the Virgin Islands Party.
#Fahie  #the Virgin Islands
Add Comment