Member of Her Majesty’s Loyal Opposition, Honourable Melvin M. Turnbull has accused Premier and Minister of Finance Honourable Andrew A. Fahie of hijacking airtime on ZBVI 780AM, forcing the pre-planned Opposition press conference to be pushed back to one hour.

Among his many childish complaints, Hon Turnbull, who has a reputation of disrespecting authority, having disrespected his own boss at the time, former Premier Dr D. Orlando Smith, in the House of Assembly (HoA) back in December 2017, and recently making injurious statements without presenting facts, accused the Premier of trying to sabotage their press conference.

During the day, the Government Information Service (GIS) released a flier stating that the Premier’s debate contribution during the Fourteenth Sitting of the Second Session of the Fourth House of Assembly on September 29, 2020, would be repeated on ZBVI, ZKING, ZCCR,CBN and TOLA Radio between the hours of 2:00pm to 9:00pm on September 30, 2020.

“We had a start time for today’s press conference of 3:00pm, so it is not any fault of our own, so we want to make sure that it is abundantly clear. The Premier even in his contribution last night stated that we were going to have a press conference today so he was well aware of the press conference and he would obviously be made aware of the time. And, he hijacked the time to allow for his statements made in the House of Assembly to run for almost two hours on the media,” he remarked.

Honourable Turnbull failed to mention whether he had contacted the management of the privately run entity ZBVI Radio on the programming and whether it was any fault of Premier Fahie that his programme time overlapped with the Opposition press conference's. 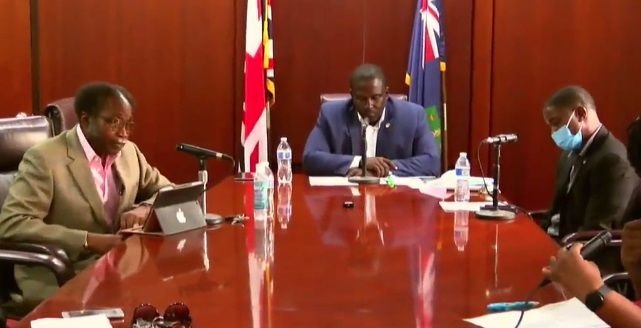 The former National Democratic Party (NDP) member Honourable Turnbull, who has been receiving strong criticism for stating that a local barge owner has been receiving exorbitant fees from Government for barge services for border surveillance without presenting facts and even while Premier Fahie has stated it is not so and presented different figures, said the work of the Opposition would continue despite the setback.

“So we are here nonetheless to do our job. We will not be intimidated or fazed by the tactics and the games that are being played because if you see a game, you know it’s a game. You see somebody dribbling a ball and shooting a ball, that’s a game, but they will tell you that’s not a game.”

He added: “We are here in our continued commitment to carry on a conversation where we do our job which is to hold the government responsible and to hold them accountable.”