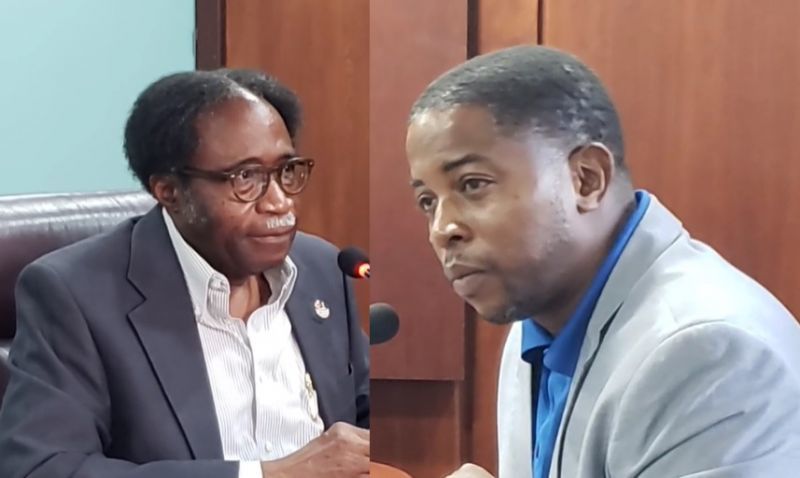 Hons Turnbull & Fraser dodge ?? on support for Hon Penn as next Premier

Opposition Members in the Virgin Islands (VI) House of Assembly (HoA), Hon Melvin M. Turnbull (R2) and Hon Julian Fraser RA (R3) dodged questions on whether they support the Opposition Leader Hon Marlon A. Penn (R8) in his bid to become Premier of the VI.

Honourable Penn has said he is ready to be the next Premier of the VI as well as a snap election, even though he has not been able to garner support from members of his own party, who are allegedly not convinced he is the right person to take the National Democratic Party (NDP) into the next elections constitutionally due in mid-2023.

Further, there have been questions asked as to who Hon Penn is really leading as Opposition Leader, since Hon Turnbull is from the Progressive Virgin Islands Movement (PVIM) and Honourable Fraser is from Progressives United (PU). The other Opposition Member, Hon Mark H. Vanterpool (R4) has already indicated he will not be seeking re-election.

'Election will have to be called first'- Hon Turnbull

During a February 2, 2022, press conference on issues against the Government, Hon Turnbull was asked whether he, as part of the tri-party Opposition, would stay united in ‘one voice’ and support the Opposition Leader Hon Penn in his quest for Premier.

During the press conference, Hon Turnbull refused to give a straight answer, saying deciding on his support will first require an election to be called.

“We stand united as the members of Her Majesty’s Loyal Opposition, to represent the voices, the needs, and the concerns of the people of the Virgin Islands… there is no question about that,” he said.

However, Hon Turnbull said transitioning that unity amongst the three active Opposition Members on the road towards a premiership, will first require an election to be called.

“There needs to be an election called, this is indeed the last year of this administration… but this is indeed a democratic society where we have elections.

“Each one of us on this platform falls and stands with a different party, and whatever happens during the elections, that’s where the people will decide,” he added.

Hon Turnbull said whoever the people decided on after the elections, “we will deal with that at this time.

He said, however, the Fahie administration is the prime focus as of now.

“Our focus now is to hold the government to account, to address the issues that are affecting the people of the Virgin Islands and make sure that it is brought to the forefront and when we get to the election, hopefully, there will be no contention with this present sitting government,” he said.

Hon Turnbull reminded that the VI is still on the heels of wrapping up a CoI and however, the Fahie administration is operating like ‘business as usual.”

“That’s where we are… and we have to follow that process,” Hon Turnbull added.

Hon Fraser added that the question was not a fair one, given the members of the Opposition are from three different political parties.