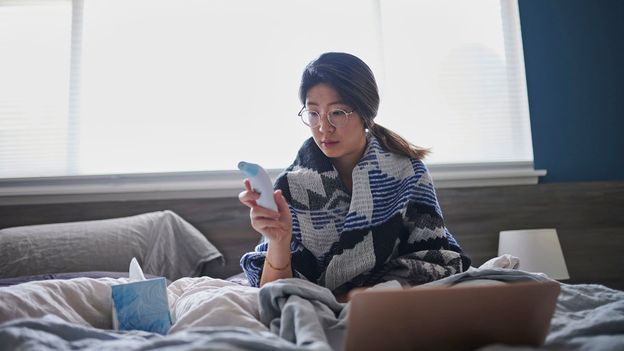 How remote work could nix the sick day

Sick days used to mean resting, not working. Now, however, more employees are logging in from home as they fight illness – after all, if people are remote already, why take time off?

Before the pandemic, ill workers quite often showed up in the office, coughing and spluttering away as they tackled their workloads. Today, fortunately, sick employees can often work remotely, keeping their germs to themselves. But this shift raises a new dilemma for workers. Exactly how ill do you have to be to take a ‘proper' sick day from home?

Before, the choice was binary for most sick workers: power through despite feeling lousy and go to the office, or stay at home and abandon work for the day. Option one could mean keeping on top of your work (and pleasing the boss), while option two could potentially aid your recovery.

Now, it's not so simple. Yes, colds or the flu can be debilitating, and people certainly might not be in shape to jump on a train and head for work. But for busy employees able to work from home, it can be tempting to continue firing off emails and performing daily tasks while coughing away on the couch, instead of taking proper time off to rest.

It's a problem that could become more common as hybrid and remote work spreads. Polling data from the US suggests two-thirds of workers feel remote work adds pressure to work while sick; other polls suggest the same proportion feel obliged to clock in remotely, even if they're sick. In the UK, sickness absence hit record lows in 2020, as people worked from home (but rebounded somewhat in 2021, partly due to an uptick in coronavirus cases).

Right now, data indicates many sick workers are logging in from home, and that ‘proper' sick days are becoming increasingly rare. Experts say that both companies and workers need to stop and think about this shift – and its implications for productivity, company culture and worker wellbeing – before it becomes an entrenched practice.

People have always worked while ill; sickness absence had been falling before the pandemic, both in countries such as the US (which doesn't have nationally mandated paid sick leave) and the UK (which does). But now, remote work has enabled ill people to crack open their laptops and work from bed – making skipping sick days in favour of presenteeism easier than ever.

Early in the pandemic, redundancy fears, combined with guilt and a fear of falling behind, caused many remote workers to log on while ill. Anecdotally, that trend has continued, even as the situation has stabilised, because widespread remote work has made things more complicated: we all know people who work from home while ill, if we don't do it ourselves.

Widespread remote work has made things more complicated: we all know people who work from home while ill, if we don't do it ourselves

Remote work has made “decisions regarding when, and when not, to take sick days harder”, agrees Brittany Lambert, assistant professor of management and entrepreneurship at Kelley School of Business, Indiana University, US. "The boundaries, rules and structures which governed the way we thought about our work, in many cases, fundamentally changed."

Now, when you're working from home anyway, a sick day can feel like any other day – so workers might feel as though the bar to call out for the day has been raised, says Ann Frost, associate professor of organisational behaviour at Ivey Business School at Western University, Canada. “If I've got a bad cough and I clearly have a bad cold, I don't want to be with my colleagues”" she says. “But can I stay in and still get the project done I'm supposed to do? You bet I can.”

In some cases, workers have only felt catching Covid-19 was a good enough excuse to justify a sick day during the pandemic – and even that’s been up for debate.

Greg Couser, occupational medicine physician at the Mayo Clinic in Minnesota, US, one the country’s largest healthcare organisations, points to a lack of clarity on sickness between employers and employees. "The issue truly is expectations in the workplace," he says. "And it seems like expectations in the workplace have changed, and I guess ground rules haven’t really been established yet." 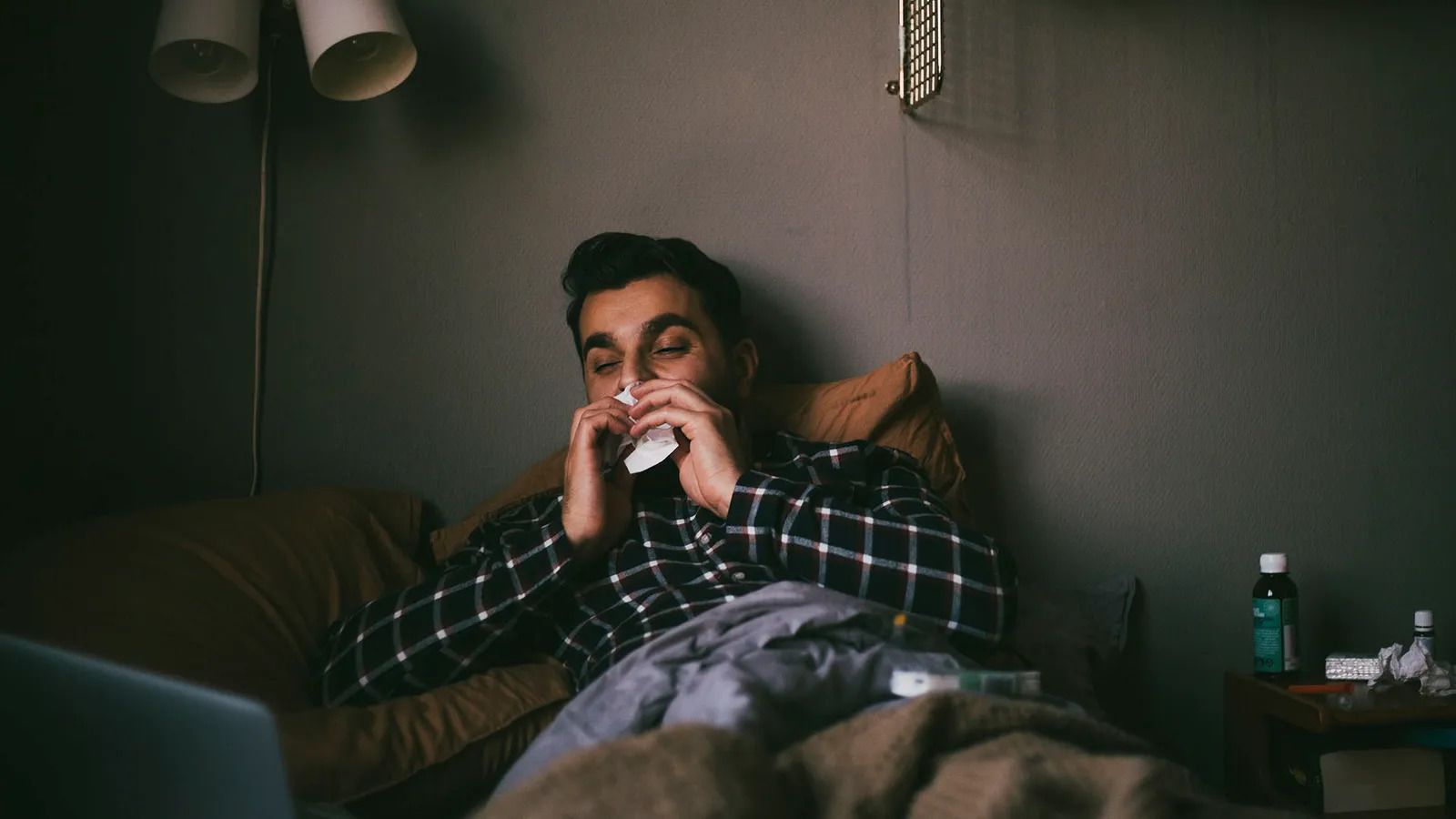 Many remote workers feel guilty, or that they'll fall behind on work, if they take sick days when they feel ill

The role of company culture

In the absence of ground rules, some workers might see the evolution of the combined work/sick day as a positive; if you have a mild illness, you can take a little more care of yourself at home, while still getting necessary work completed. That means you’re not letting anyone down, and there’s less likely to be an unmanageable mound of work awaiting upon your return to health.

But there are multiple reasons why it might be better to take a proper pause to recover from sickness. Data has long shown working while sick leads to worse job performance. Research also suggests a link between not taking sick days and an increased risk of depression, while a 2022 study showed that working from home sick made workers feel more guilty than if they had just taken the sick day. Plus, working remotely while feeling moderately ill – bad enough to have made people stay at home pre-pandemic – could lead to more burnout, says Couser.

“The crux of it all is that people aren't going to get better, they're going to get sicker, they’re going to get more stressed out and there’s going to be all sorts of consequences that we don’t even know about," says Couser. It’s in companies’ interests to encourage people to take sick days, because “although there may be a short-term gain in productivity, it could lead to a longer-term loss”.

Of course, the pandemic has ushered in more worker autonomy and flexibility, meaning that if an individual wants to work remotely while sick, they can work while sick. It's up to them. But, say the experts, that decision will be heavily influenced by their company culture and the messages leaders are sending, both explicitly and implicitly.

“If employers say, ‘You can just work from home – if you've got a cough and a fever, just take an Advil and hop into bed and you'll be fine’ – that's bad. That's bad culture. Who wants to work at a company like that?” says Frost.

Each person will be different in terms of how they handle sickness, she adds; what’s debilitating to one may be manageable for someone else. Seeing colleagues working while sick could pressure others to do the same. That’s why, she says, the “organisational piece” is key workers need a positive culture that safeguards their right to call in sick when necessary, especially when working hybrid or remotely.

As with many aspects of work since the pandemic, both employers and employees are still navigating these changes; it may take time for best practices on remote-work sick days to become embedded.

Couser suggests it is in companies’ best interests to address this issue; if workers don't feel supported enough to call in sick when they want, they might leave, especially in the current employment climate. “Workers are going to be figuring out pretty quickly which companies really have this culture thing figured out,” he says.

Lambert suggests workers can play a role in finding their own balance. “I think the most important thing you can do as an individual is to figure out what works for you – and work in an environment that supports your thriving. So, if working even when you are just a little sick, feels like thriving to you – go for it. Though I would add a disclaimer and say: proceed with caution.”

Ultimately, though, she says it’s on managers to facilitate communication, support staff and build a culture that safeguards workers' health – or else, as research shows, risk a drop in productivity. Protecting and encouraging sick leave benefits everyone – and now it is the crucial time to do just that.

As Lambert says, “I think we're in a period of recalibration, and have a great opportunity to redefine what sick leave is – and could be – to better serve both organisations, and the people who work for them.”