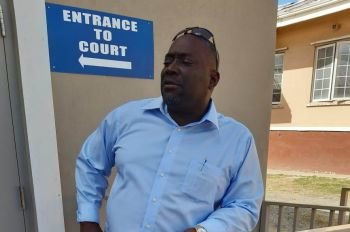 Father of nine, David Straker has told Senior Magistrate Tamia N. Richards he is not willing to sell any more of his real estate to pay lawyers to defend him.

Straker, Donald George, Lindon Chiverton and Anderson Flax are jointly charged since 2015 with drug charges after 80 kilograms of cocaine was allegedly found among their possessions on a boat on their return from the United States Virgin Islands (USVI).

The accused drug dealer said he has had to sell some of his lands to pay more than three lawyers who have represented him since the inception of this matter.

“Your honour I have nine children and a father, a parent supposed to give their children something. What I got is for them,” adding that he has sold enough land during an emotional plea to the court to grant them additional time to seek legal representation in the matter on Wednesday, December 4, 2019.

Straker further said he has had to pay more than $108,000 in legal fees already.

When the court asked his co-accused, George, how much he has spent in this matter, Mr George said “too much your honour. I had to borrow some money from friends,” because he did not have any real estate to sell.

The men opined that one of the reasons persons are still at Her Majesty’s Prison is because of the high rates being charged by criminal lawyers in the Virgin Islands.

Jamaican attorney-at-law Marlon Gordon, who was absent during the trial continuation due to ill-health, is the legal representative for Straker, Chiverton and George.

Attorneys Patrick D. Thompson and Reynela Rawlins, who represent Mr Flax, are hoping the court rules in their favour today, Friday, December, 6 2019, to allow Flax to be tried separately from the others who are causing delays in the conclusion of the matter.
Add Comment