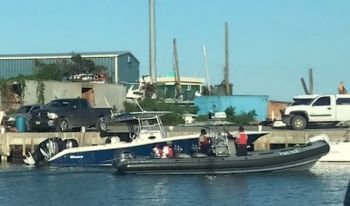 Senior Magistrate Tamia N. Richards has said under the Customs Management and Duties Act the dinghy used to smuggle US Virgin Islands (USVI) resident Bryan D. Bolan into the Virgin Islands (British) on April 3, 2020 by Tambu Frett, is liable to forfeiture.
Addressing the Magistrate’s Court via Zoom on Friday, May 1, 2020, Ms Richards said the matter would be heard on Thursday, May 7, 2020.

The vessel in question allegedly belongs to Mr Jerome Hopkins Jr, who is represented by attorney Valerie Stephens-Gordon.

During the court’s sitting Magistrate Richards said; however, when she looked at section 110 of the Customs Management and Duties Act it says “the vessel is liable to forfeiture.”

Nonetheless, there is no guidance under the Act as to what procedure should be adopted, which leaves the court to figure it out.


She explained: “Because you cannot go to the legislative council or the House of Assembly every time the court has a question. Often legislation give courts powers, give persons responsibilities and it doesn’t explain how it should be carried out. So we have to go back to general principles for example fairness, the natural justice, the right to be heard before we take someone’s property.”

In the meantime, while the oral application for the forfeiture was done during the arraignment of Frett and Bolan, the magistrate instructed the Acting Director of Public Prosecutions (DPP) Tiffany R. Scatliffe-Esprit to submit a written application to the court.

“We are just asking counsel to crystalise it in writing for the purposes of the system,” Magistrate Richards stated.

She said the matter would be proceeding as a civil and not a criminal case.

Next Thursday at 10:00am, the court heard, the relevant parties are expected to be present to discuss the way forward.

‘I want the boat’- Acting DPP


Meanwhile, Mr Frett, through his lawyer, Mr E. Leroy Jones, enquired whether he would get back the money seized by police on the day of his arrest.

Magistrate Richards then asked Ms Scatliffe-Esprit if there was an application for the seizure of Mr Frett’s money.

“I am not going after the money, I want the boat,” Ms Scatliffe-Esprit replied.

The Magistrate then informed Mr Frett he would get back his money and suggested that his lawyer have a conversation with the investigating officer about its return.

On May 7, 2020, Mr Frett, who has pleaded guilty to Smuggling, Illegal Entry and Breach of Curfew, is expected to be sentenced.

The sentencing has already been adjourned three times in a row.