'I am still a member of Her Majesty's Loyal Opposition' – Hon Mark H. Vanterpool

Opposition Member and Fourth District Representative, Honourable Mark H. Vanterpool has finally addressed concerns over his no-show at press conferences called by his Opposition colleagues, declaring that he is still a part of the three-party team.

Hon Vanterpool, speaking at the groundbreaking ceremony for a new One Mart shopping centre in Fat Hogs Bay, Tortola, on Wednesday, November 4, 2020, said, while he is still a Member of the Opposition, he is dedicating his energies to serving country rather than just a party.

“Yes, I am still a member of Her Majesty’s Loyal Opposition, and I will remain,” he declared.

Hon Vanterpool, who was first elected as a District Representative in 1999, added: “But, I tell people I am now a statesman. We, after a number of years in politics, decide that we are looking out for the country more than party; so right now I am looking out for country.” 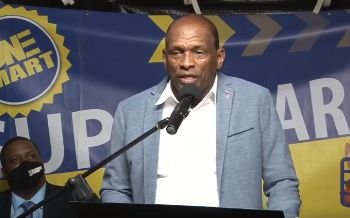 Fourth District Representative, Hon Mark H. Vanterpool has said while he is still a Member of the Opposition he is dedicating his energies to serving country rather than just a party.

'I am now a statesman'- Hon Vanterpool

The veteran politician and former Minister for Communications and Works, said he remains in close contact with Opposition Leader Hon Marlon A. Penn (R8) as well as Premier and Minister of Finance, Hon Andrew A. Fahie (R1).

He explained: “I advise Honourable Penn as much as I can, we sit together, we have breakfast, lunch whatever, but I also harass the Premier and tell him when he is doing great but when he is doing wrong, he knows, he gets a text from me. That is the best way I find to communicate with him now, I text him, and in a few minutes, he calls me back, and then we chat it out. But, that’s what I am now, I am going to advise all sides, I am now a statesman.”

The other members of the Opposition- Hon Penn, Hon Melvin M. Turnbull (R2) and senior member Hon Julian Fraser RA (R3)- have been the ones publicly holding the government’s feet to the fire.