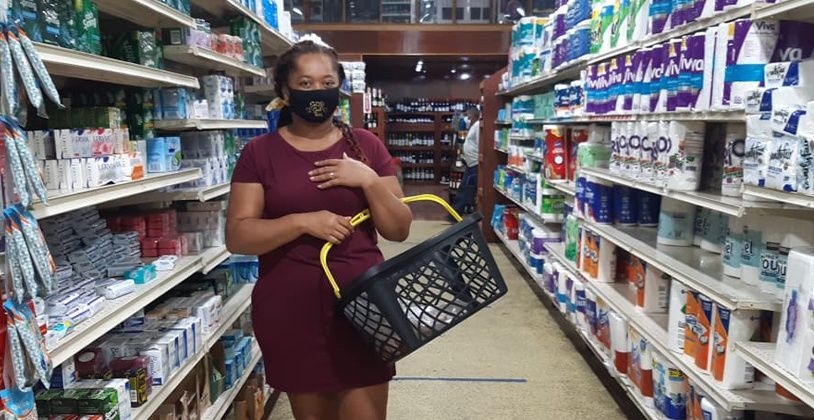 BVI Platinum spoke to a cross-section of shoppers, from low income earners, to a top government employee, on Tuesday, October 26.

“The cost of living in the BVI has risen exponentially! Over the past months, it’s unbearable. I mean every time you go to the supermarket the price increase from $2, $3, $1, its astronomical. Prices in the BVI have been unbearable for the poor man,” a supervisor in the public service told BVI Platinum on Tuesday while shopping at his favourite grocery store.

“I’m getting less for the money I spend now. Before I could go to the grocery store and spend a $100 and get sufficient groceries, basic food items to last me for almost a month.”

He said he is now spending upwards of $200 for the same items.

“There has been a tremendous increase in price over the past few months; I don’t know, maybe the COVID and the shipping confusion that they have but there has been a tremendous increase in the price of goods and services. I cannot save money; I spend more money on groceries. I used to full my tank of gas with $20, $30; now it is $40 and $45,” he added.

“This is what happening all over. You pay more for the stuff now,” a welder, carrying a few loaves of bread in his hands heading to the checkout line, said in response to our queries.

“It’s affecting me because I have to spend more, and the minimum wage is not up there where I could get more from the employer.”

Another low income worker said he, too was feeling the pinch.

“It [cost of living] is very high. Gas prices are high; groceries are high.”

In the meantime, a visiting couple from the United States (U.S) agreed that the prices in the BVI were at least 30% more than on the mainland, and they associated that with the shipping costs and the COVID-19 situation that has also caused the U.S. to see soaring prices as well.

“It’s definitely more expensive than at home, but I don’t know by how much,” the female shopper said.

“I normally shop for food by the trolleys, I now have to actually come with the basket because the prices are rising so rapidly it’s ridiculous!”

She said these days, she has resorted to shopping at multiple locations to capture the best deals for her budget as well as online for items such as soap.

She continued: “A little goes a long way, and you have to know how to manage your food, it’s not like you can eat and throw away stuff.”

She said these days she has been using leftover food to create new meals and has been encouraging others on social media to do the same.

A health worker, when interviewed, said while she was affected, she was being careful with money.

Notably, the Central Statistics Office stated that the percentage is an average from January to August 2021. The Statistics will change as data is collected for the rest of the year, from September to December.

Online research suggests that there are many reasons why the prices on goods and services are rising.

One of the top reasons are the demand for oil and gas has soared globally; hence the price of energy is also on the up, according to a BBC report. What this effectively means is consumers have seen and continue to see an increase in the cost of production of goods and services, such as is being reflected in the high cost of living further compounded by soaring inflation rates in the British Virgin Islands.

Other reasons are one; there are shortages and bottlenecks in the transportation of goods around the world, and the effect of the lingering pandemic still affects the human resource and supply chains.