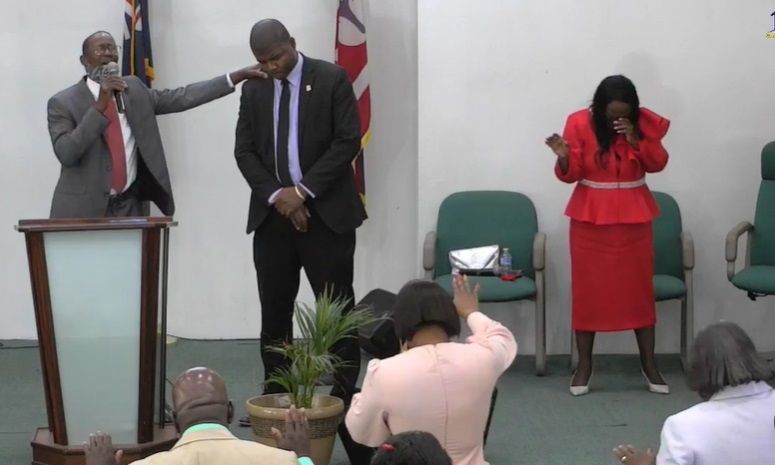 With elected representatives in the Virgin Islands coming under heavy criticism and even suspicion following the arrest of former Premier Andrew A. Fahie and then the release of the damning Commission of Inquiry (CoI) Report, the regaining of public confidence and trust has been a focus for them, especially with the installation of the National Unity Government.

Many of the elected representatives have sought to distance themselves from the alleged illegal actions of Mr Fahie and have also asked the public for forgiveness where they may have not spoken up for the people when required or would have supported certain policies and projects that turned out to not be in the public’s best interest or indicative of good governance.

On Mother’s Day, Sunday, May 8, 2022, Premier Dr the Hon Natalio D. Wheatley (R7) got his turn to not only apologise to the people while in church but to also request prayers for himself and the new Government.

The VI has been ‘warned’- Dr Wheatley

Dr Wheatley, speaking at the Community Worship Centre, Church of God of Prophecy in Long Look, said the Virgin Islands has endured a lot of recent, beginning with the floods of August 2017, followed by the devasting Hurricane Irma and the COVID-19 pandemic.

He said God has continually given the VI “another chance” but His mercy was taken for granted.

According to Premier Wheatley, the National Unity Government is also another chance given by God to do right.

“This morning we had an earthquake. I believe that’s a warning because, like we said before, God can take us off the face of the map, but his mercies never fail. We have to repent as a nation, we have to repent individually and that includes myself because, of course, I believe very firmly God has a plan for my life.”

Quoting 2 Chronicles 7:14, Dr Wheatley said the Virgin Islands has a chance to do right by God and that includes the National Unity Government, or else the nation could be in “deep “peril”.

Dr Wheatley also warned that God should not be mocked “because God is not pleased with that, so we have to worship him in spirit and in truth. Worship him with our whole heart because of course I believe he will deliver us from the snares of the enemy.”

Bishop Naaman Chalwell then prayed for Dr Wheatley and also encouraged him to put his faith and trust in God.

The National Unity Government is being proposed as an alternative to the draconian measure of suspending the Virgin Islands Constitution and the imposition of direct rule by the United Kingdom.

The coalition government has pledged to work along with the United Kingdom to implement the recommendations of the Commission of Inquiry Report.

A decision has not yet been announced by the Governor, as to whether the objection to direct rule by the people have been respected.

A section of the congregation of the Community Worship Centre, Church of God of Prophecy in Long Look on May 8, 2022.