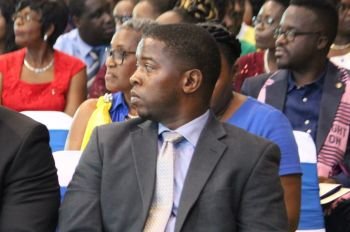 'I shouldn't be helping the Gov't, but I got to'- Hon Turnbull tells HoA

When the Eleventh Sitting of the First Session of the Fourth House of Assembly (HoA) of the Virgin Islands commenced on Thursday, October 17, 2019, at the HoA Chambers in Road Town, Tortola, legislators were already primed for what would be a long day of proceedings.

With some sixty-nine (69) questions on the order paper directed to Minister of Finance, Hon Andrew A. Fahie (R1) and his Ministers by the VI Opposition, nothing could have prepared them for what turned out to be a shocking and unexpected statement from another democratically elected legislator of the House.

"I shouldn't be helping the government eh, but I got to help," the words of Second District Representative, Hon Melvin M. Turnbull (R2) late Thursday evening.

Mr Turnbull was at the time following up with Premier Fahie on the implementation of a new accounting software at the Ministry of Finance, and the possibilities of the new software to accurately report on the territories' uncollected revenues since 2014, a question posited to the House many times before.

"Mr Speaker, could the Honourable Premier and Minister of Finance please tell this Honourable House what is the detailed financial position of the territory as of 30th September 2019; a) Balance in Consolidated Fund?; b) Balance in the Reserve Fund?" Hon Turnbull asked.

However, Hon Turnbull had further sought to know the total uncollected revenue brought forward from December 31, 2015 to December 31, 2018 and the amounts that have been collected from the previous year.

According to Premier Fahie, "Since taking office my research has revealed that unfortunately, for several years now, most of the revenue collecting officers have not routinely filed the returns of arrears which would normally indicate what should have been collected and what was actually collected."

"In the absence of this critical data, it is extremely difficult, if not nearly impossible to any degree of accuracy to first estimate what amount may have been collected in a subsequent year or was owed or deemed arrears in a prior period. This matter is in the process of being addressed and hopefully, with this new system that we are putting in, we can have it addressed."

He said based on the system that was being used before and the procedures, "the cold hard fact is that the system doesn't have it to give it to us."

Responding to a follow-up question on whether dedicated persons were assigned to handle the issue, Premier Fahie indicated that currently, while the answer is no, with the implementation of the new accounting software forecasted to solve existing issues, new training is being executed for personnel in the Finance Ministry.

"Everyone right now is in training, just to be able to learn how to use the system [JD Edwards EnterpriseOne], the first priority is to make sure that they get the payments/salaries done more efficiently so they are working on that," Hon Fahie said while noting that another phase will address other features, including one that calculates arrears.

Hon Turnbull, in seeking more clarity responded, "I shouldn't be helping the government eh, but I got to help him," and after brief mumbles from the House, he clarified, "No, I don't want to help the Premier in this, but I have to."

Hon Fahie responded, "Just in terms of language though, when you're saying you want to help the government... I [am] not clear what you mean, because remember we in this together, we helping the people, so there's no sides when it comes to this."

The Premier then noted that the obsolete accounting software was destined to fail and as such, is being phased out completely in what he says was a difficult decision to make.

"Once you change anything, there's going to be some processes that you have to go through, and yes some of it could have been done differently... everybody knew it was absolute before. I believe If there's a problem it don't make sense talking about it all the time and don't fix it," he said.

The Premier clarified; however, starting from scratch does not mean 'ground-zero'. He said it would mean going from department to department to gather financial data records, inclusive of hunting and gathering files which may or may no longer be available as a result of the hurricanes in 2017.
Add Comment