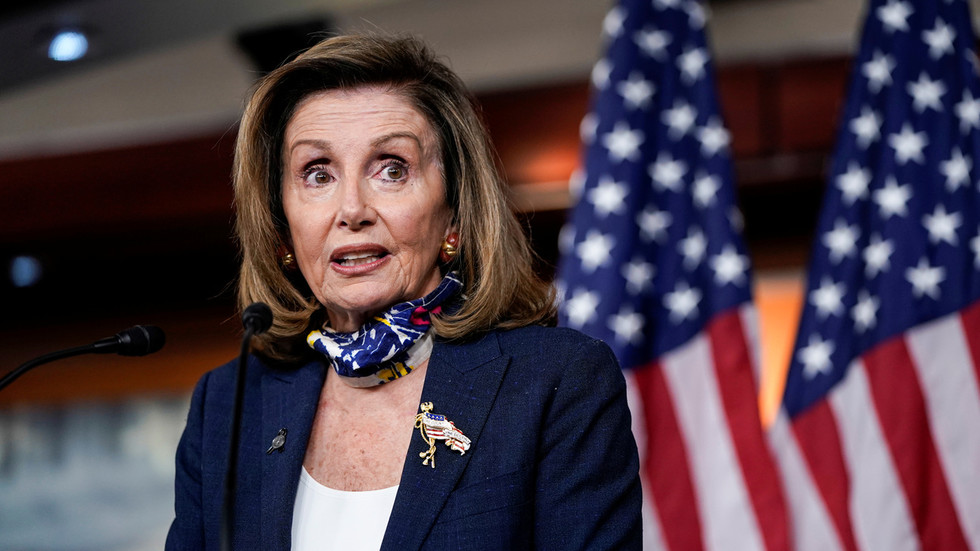 Impeachment round two? Pelosi says Dems will use ‘every arrow in our quiver’ to stop Trump replacing RBG if he loses in November

House Speaker Nancy Pelosi refused to rule out impeaching Donald Trump again, should the president lose the White House in November and attempt to confirm a Supreme Court justice before leaving office.

The death on Friday of Supreme Court Justice Ruth Bader Ginsburg has thrown the usual pre-election squabbling in Washington into fever pitch, with Trump vowing to nominate a replacement for Bader Ginsburg as soon as next week. However, the president’s first obstacle is November’s general election, after which his time in office, and his party’s control over the Senate, could be finished.

Should Joe Biden win the election, Trump and the GOP could still press ahead with confirming a successor before January, when Biden would take office and a new congressional term would begin. Asked on Sunday whether she’d push to impeach Trump if this transpired, Pelosi kept her cards close to her chest.

“Well, we have our options,” she told ABC News’ George Stephanopoulos. “We have arrows in our quiver that I’m not about to discuss right now.”

In a slightly bizarre exchange, Stephanopoulos asks if the House would impeach Trump or Barr if Senate GOP tries to vote on a SCOTUS nom during lame duck session (to stall the confirmation), and Pelosi refuses to rule it out: "We have our options. We have arrows in our quiver." pic.twitter.com/aoXPh6cFlt

Asked by Stephanopoulos whether she was “not ruling anything out,” Pelosi responded:

George Stephanopoulos suggested to Pelosi this morning that the House could impeach Trump again in order to stall or block a Supreme Court nomination during the lame duck session. Yeah, that'll go over well

Impeachment, however, will likely be a tall order. Pelosi’s party attempted to impeach the president earlier this year, alleging that he had engaged in quid-pro-quo bartering over military aid with Ukrainian President Volodymyr Zelensky. Both Trump and Zelensky denied the charges, and the Senate acquitted Trump in February in a party-lines vote.

Throughout the entire impeachment process, public support for removing Trump from office never broke 50 percent, and was divided along partisan lines. Going through the process a second time around likely would achieve little more, though it could frustrate Trump’s attempts to confirm a successor to Bader Ginsburg and consume valuable Senate time.