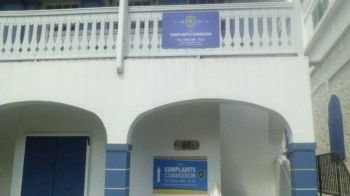 St Lucia national Verne A. G. Garde is the current Superintendent of Prisons from outside - but in fact he should be the first one to be locked inside for such a crimes against humanity.

Mrs Brathwaite said this is due to the rise in complaints that the Commission receives from Her Majesty's Prison (HMP).

"The CC further informed the committee about the receipt of phone calls from prisoners which prompted them to visit the prison. There they found that the library was void of legal material and were able to show them several legal websites for research purposes. She further indicated the need for the Human Rights Commission given various complaints received from families and prisoners, "the Standing Finance Committee Report (SFCR) stated.

Standing Finance Committee was held between November 20 and 29, 2019 at the Office of the House of Assembly in Road Town, Tortola.

The SFCR said, according to Brathwaite, the most frequent complaints received pertained to the non-responsiveness of public officers.

It was on December 19, 2019, when we reported that Second District Representative in the Virgin Islands (VI) House of Assembly (HoA) Hon Melvin M. Turnbull (R2) related that on a recent visit to the Balsam Ghut facility, prisoners reported they were being tased in the head and face while being handcuffed.

"Listening to the concerns of the prisoners and Hon Smith [Neville A. Smith (AL)] and Hon Penn [Marlon A. Penn (R8)] were there as well... we need to ensure, Mr Speaker, that yes they are incarcerated, but we need to ensure that there is some guard watching the guard," he said on December 13, 2019, budget debates during the continuation of the Second Sitting of the Second Session of the Fourth House of Assembly (HoA).

St Lucia national Verne A. G. Garde is the current Superintendent of Prisons from outside - but in fact he should be the first one to be locked inside for such a crimes against humanity.