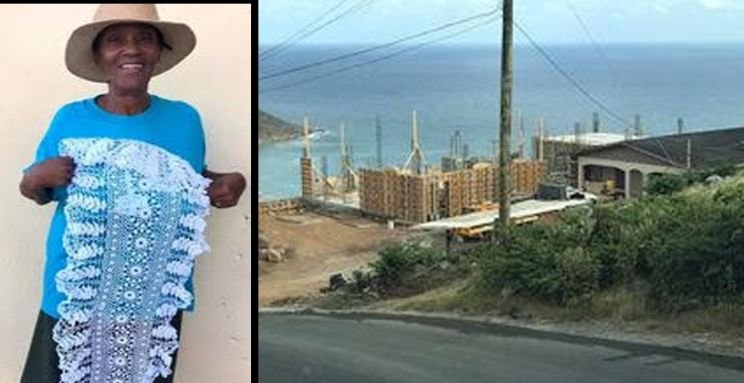 Inspiring! 78-Year-Old Retiree On A Mission To Help Rebuild Church

For this 78-year-old widow, doing nothing as the Church of God of Holiness in North Sound, Virgin Gorda, that she has been a member of for eons, sought funding for its repairs was out of the question.
“It came to my mind to do some little crochet work to see if anybody would buy them to help with some money for our church because we are not a big group and some of the people are not working,” Bernice Lennard who is a retired hospitality worker said.

“I started this craft when I was in school so I then I picked it up after some years when I stopped working,” she added, pointing out that this was the first time that she would seek to sell her craft.

The 2017 hurricanes caused the chapel’s roof to cave in and the building was rendered unusable since then. She crocheted over 100 of her designs for herself as well as for friends to keep her busy.

Lennard said she has no cap on the amount of crochets she intends to do for the fundraising drive, rather it is based on the demand adding, “Whatever I get I donate it to the church.”

She informed that they have been worshiping at the Mission House, one of the church’s buildings which had gotten its share of beating from the hurricanes, but not as bad as the chapel’s structure. Hence, it was repaired and is now being used as the centre for worship.

In the meantime, Senior Pastor of the church, Dr. Steve Lennard, who is also her son, commended his mother for the initiative.

He said construction started on the structure last November and since then they have been on a fundraising drive through pledge cards, food sales, and special offerings for the project etcetera.

Dr. Lennard said the government provided assistance in late December with a $20,000 stimulus that was earmarked for religious organizations.

“We are hoping, the lord help us that by summer we should be able to have it completed,” he stated.

“Everybody who has me as a friend on social media knows I am always posting my grandmother and when she told me she wants to do that I said, “ok I have a big following on Facebook, let me go ahead and post it up there.” So I took the pictures, and I just posted it,” he said.

“So far I have about two or three orders of persons who sent pictures of what they want,” he said with pride.
#Facebook
Add Comment