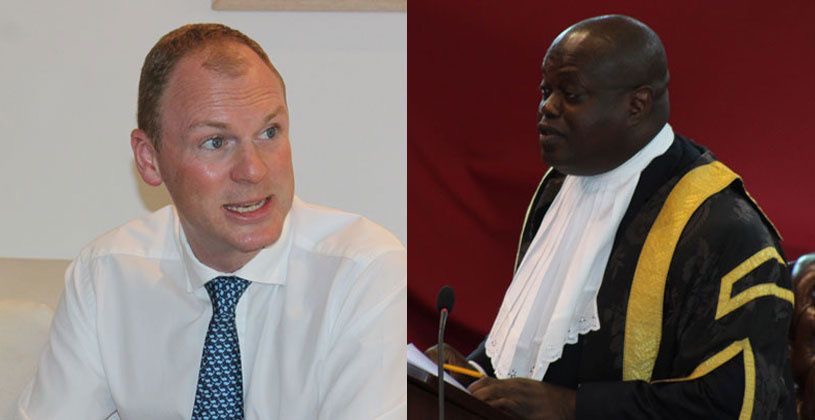 “It is unjustifiable for the speaker to extend such an invitation to the governor designee”; speaker willock scolds governor on position of swearing in new governor

In a confidential letter received by our newsroom, Speaker of the House of Assembly of the Virgin Islands Hon. Julian Willock penned another stern letter to outgoing Governor of the Virgin Islands, His Excellency Augutus JU Jaspert on the House of Assemble protocols for the swearing in of the incoming Governor.
In the letter Speaker Willock said: “I read in a news release dated 17th September, 2020 originating from the Governor’s office that the Virgin Islands will have a new Governor by January, 2021 in the name of John J Rankin. However, you will agree that the Governors are not members of the Legislative Branch, as per the constitution in Section 63 (1).”

The letter further went on to state, “Despite the fact that prior to 2017, past Governor designees were sworn into office at a ceremony convened at the House of Assembly, I wish to bring to your attention that, in accordance with well-established parliamentary practice, the Governor may not appear at the HOA, unless invited by the speaker to do so.

“In actuality the only time the Governor is invited by the speaker, as Head of the Legislative Branch to the HOA, is to deliver the Speech from the Throne, which is done as a courtesy extended by the Premier.”

As it pertains to the swearing in of the next Governor Mr. John J Rankin, speaker Willock said “Therefore, to avoid any confusion, I am requesting of the Deputy Governor’s Office to plan a place to swear in the new Governor, that is outside the chambers of the HOA, in keeping with the constitution of 2007 and precedent already set in 2017. In addition, it is unjustifiable for the speaker to extend such an invitation to the Governor designee, if the oath of office has not yet been effected, and the Governor designee is not yet the Governor.”

The letter which was also addressed to the Premier of the Virgin Islands, Hon. fahie">Andrew A Fahie stated. “Hon. Premier, you will agree, it is also prudent to note that the Governor is not connected in any way to the legislature; however, as it relates to Members of the HOA, it is fitting and appropriate for them to be sworn into office at the HOA, because they are elected by the people and are therefore elected members of the HOA.

The Governor according to Section 63 (1) of the constitution, is not an elected member of the HOA, therefore swearing him in at the HOA will not be appropriate.”