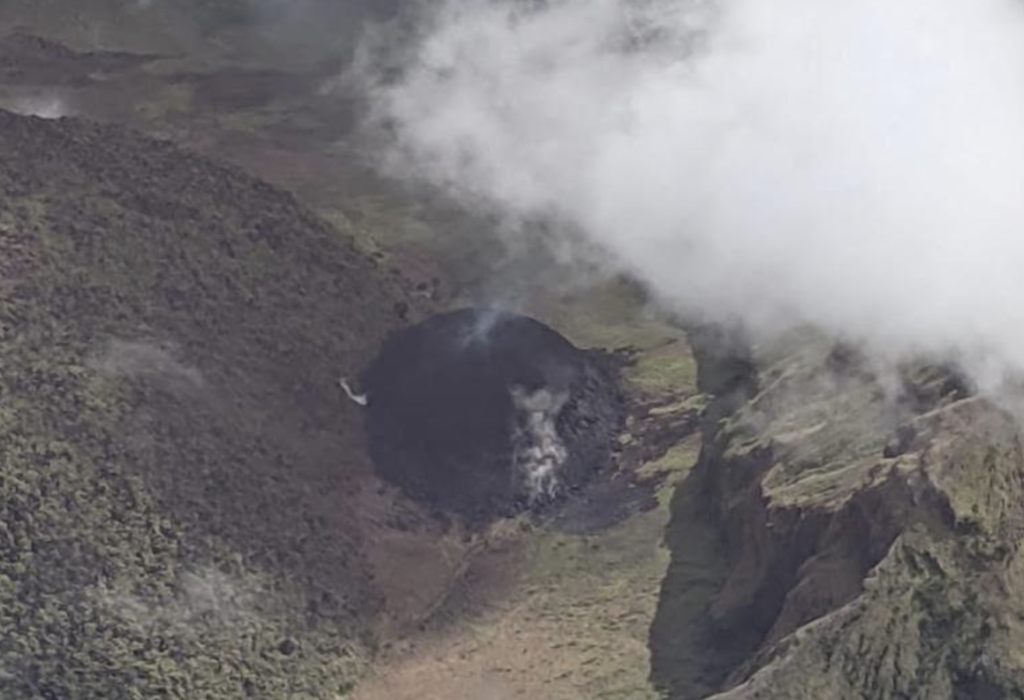 Residents in the British Virgin Islands with familial ties to St Vincent and the Grenadines have expressed concerns following the latest volcanic activity occurring at the La Soufriere volcano.

According to the Seismic Research Centre at the University of the West Indies’ (UWI) St Augustine campus in Trinidad and Tobago, the alert level connected to the activity of the volcano raised from yellow to orange on Tuesday, December 29.

The orange level is the third highest reading of the four-colour scheme, which means that the volcano has entered an effusive eruption stage. In this stage, magma is usually observed oozing from the volcano and has the potential to graduate to level red as was the case in 1979, when the last explosive eruption occurred.

Authorities have therefore alerted residents living in northern parts of St Vincent to prepare for evacuation at short notice should such measures be required if the volcanic activity increases.

At an impromptu media conference held by members of the Vincentian government and officials from UWI St Augustine, Professor Richard Robertson warned that the recent activities occurring in St Vincent are very serious and said that the volcano is erupting.

However, he said the professionals are doing all within their power to give Vincentian nationals ample time to safely evacuate the nearby areas of La Soufriere, should the volcano erupt.

“We are trying to make sure you have whatever the time you need to move people out of harm’s way — whether it is 48 hours, 24 hours, whatever time that is. We want to be in a position to give you that and we will try as hard as we can to that,” Professor Robertson stated.

“I think you have to prepare for a rocky road for the next couple of months, unfortunately. Prime Minister, I think St. Vincent dodge COVID, but I am not sure you are dodging the volcano, unfortunately,” he further said.

Vincentians in the BVI very concerned

Meanwhile, BVI News spoke to a number of residents here in the territory who expressed that they were very concerned with all that’s occurring in their native land of St Vincent.

One female resident from Cane Garden Bay who opted to remain anonymous said the lack of precise information was her main concern as her family members back in St Vincent are clueless of how to adequately prepare, should the volcano fully erupt.

She said: “My greatest concern is like they don’t have enough instruments to test to know what kind of activity going on with the eruption now, based on what I read last night. It’s like they’re uncertain, and people be restless. You need to sleep, you don’t want to be up all night wondering if the volcano is going to erupt now. They don’t know, it’s like a question mark.”

“They’re just not prepared, they’re not even telling people what to do in case of anything. It’s not enough information in the media or nothing — more of word of mouth and sometimes word of mouth does be wrong. The older people experienced it before, but how much of them alive today? All they’re saying is not to go to the volcano and be ready to evacuate, that’s all,” the Vincentian BVI resident added.

Entire family in the BVI worried

Another female resident from East End/Long Look whose father is a Vincentian said they too became worried after hearing of the latest developments coming from the La Soufriere volcano.

“It’s concerning. Since yesterday when I found out about it, I reached out to my dad and he is concerned too. He’s been checking with family that’s there and he has two siblings who live near La Soufriere, so just checking in with them to make sure everything is ok. But I think for the most part everybody just watching and waiting and praying that it doesn’t reach what happened in the 1970’s. And then, it didn’t completely blow, and no one would know what would happen if it completely blows,” she explained.

She continued: “La Soufriere, where it is, a full explosion would separate the island, separate the northern and south from the rest. I don’t know how you would be able to cross, so that would be my only concern on how that would happen with the present road network there. So my only concern would be how would they get help if something was to happen and they were to be separated, because of where the volcano is located.”

In October, during the historic opening of the St. Vincent and the Grenadines consular office on Tortola, Premier Andrew Fahie confirmed that more than 2,000 Vincentian nationals presently reside in the BVI.

He said the ratio of Vincentian nationals living and working in the territory is the largest in comparison to any other nationality residing in the BVI.