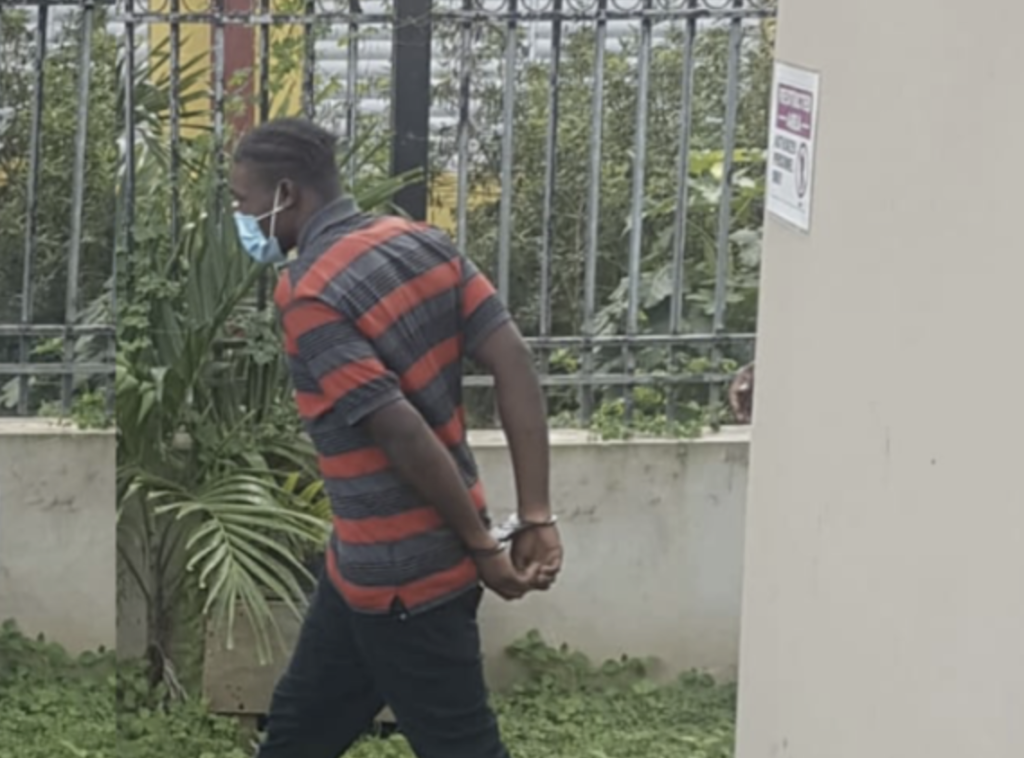 Lekhoy Hughes, one of three men implicated in a 2020 robbery at a supermarket in Virgin Gorda, was handed a prison sentence of 11 years and four months when he appeared before the High Court recently.

Hughes, 22, was accused along with two other locals — firefighter Rakeem Lennard of North Sound, and Tray Audain — of robbing Ruby Esther Saballa Manzueta of one handbag, one Louis Vuitton purse, a cheque in the amount of $336, one pair of $200 air-buds, $500 cash, and one Dominican Republic identification card.

They were also accused of robbing Marian Santos-Hernandez of one handbag, $3,841 cash, two bank cards, one white iPhone 11 Plus, one driver’s license, and a number of documents at the Bay 6 mini market, located at The Valley on Virgin Gorda on October 15, 2020.

Hughes previously pleaded guilty to two counts of robbery and one count of possession of a firearm with intent to endanger life.

While considering his sentence, Judge Richard Floyd pointed out that Hughes’ personal history, as outlined in a social inquiry report, demonstrated that his particular circumstances were severe if not desperate.

Hughes, it was noted, suffered multiple family illnesses and deaths and lost the stability and structure of a family. He lost the support of his parents and his siblings and found himself living in a ‘homemade structure’ with no regular income.

But Justice Floyd was keen to note that those circumstances “in no way justifies this serious criminal behaviour” Hughes exhibited.

The defendant spent more than a year on remand since his arrest and was given credit for this in being sentenced. The sentence to be served was therefore nine years and seven months.

Hughes was represented in the matter by defence attorney, Ruthilia Maxima.

On the date in question, a Virgin Gorda resident contacted the local police station and reported that two-armed masked men had just robbed two females of their belongings while sitting at the front of the store.

Members from the Royal Virgin Islands Police Force immediately responded at the scene of the incident where they were informed that the robbers had fled in a white rental vehicle shortly after committing the crime.

The witness also informed the officers that before the incident, the two females were watching a movie on a mobile device when they observed two persons dressed in all black with shirts covering their entire face, wearing gloves with guns in their hands. The two persons approached the complainants from the back and forcefully snatched both their handbags and fled the scene.

Vehicle apprehended shortly after and one male escaped

The Crown told the Magistrate’s Court previously that during the investigations, police had received information that the gunmen were fleeing towards North Sound in the vehicle described.

The police immediately headed toward the direction of North Sound in pursuit of the suspects where they spotted lights on an empty roadside heading towards the North Sound area.

The Prosecution further said police eventually reached the area of the North Sound basketball court where they observed a number of parked vehicles, including a white Kia rental jeep which matched the description of the suspected vehicle.

The officers noticed that the engine of the vehicle was still running and upon approaching the vehicle one of the occupants exited from the passenger side, ran, and escaped through a bushy area. Police then observed that three other occupants were in the vehicle.

Crown Counsel London noted that Audain’s name was behind the rental of the vehicle and he was sitting in the driver’s seat when the vehicle was intercepted. The other two accused were both in the rear passenger seats of the vehicle.

The three accused were cautioned and a search was conducted on the vehicle where two female handbags were found on the front passenger floor of the vehicle. When the accused men were asked about the bags, all three denied ownership.

The victims arrived at the location shortly after and were able to identify the bags as the ones stolen.

London further told the court that CCTV footage was retrieved from a local mini-mart where two masked men were seen walking towards the front of the store and snatching the bags from the two ladies and fleeing the scene.

One admits, one denies, other silent

The police also conducted interviews with the three accused. According to the Crown, Hughes admitted to the allegations that were made against him, stating that he was among the two masked men that robbed the ladies of their bags.

Audain, however, denied the allegations and indicated that he was not involved in any robbery. Meanwhile, Lennard did not comment in the interview, only answering a few questions.