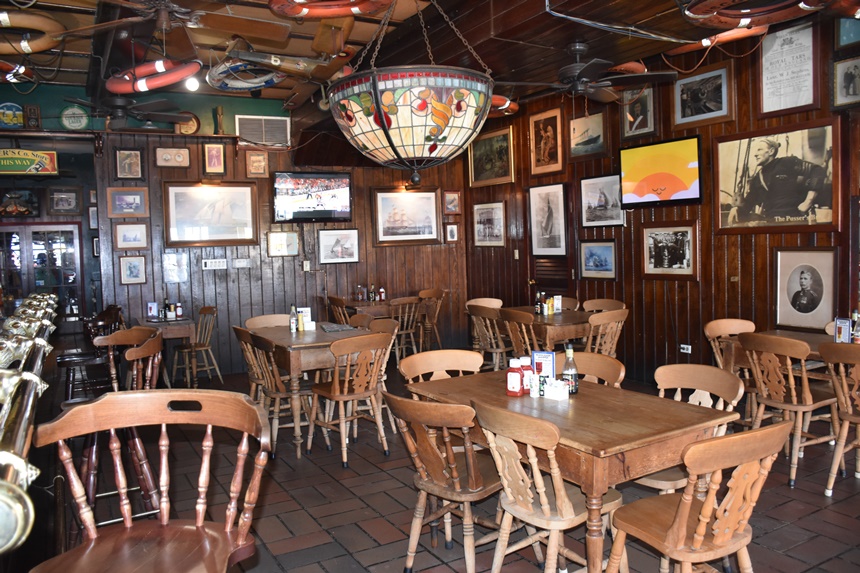 By Kamal Haynes, BVI News Staff Several restaurants in the British Virgin Islands are seeing a significant decline in dine-in traffic due to the impact COVID-19 has had on the territory.

BVI News interviewed several restaurant managers who all said day- and night-time dining has been almost non-existent since the government approved the reopening of local restaurants in the territory and extended the night-time curfew just under a month ago.

According to the managers, the decline in business is because of the halt in tourist arrivals.

Pusser’s Pub, Road Town manager Devon Hamilton said the business has been severely impacted, as it usually relies on the influx of tourists who know to frequent the establishment.

“Since the government has lifted the ban where they have allowed the restaurants to do seated dining, I have not seen any business from that time until now, we are practically running an empty dining room,” Hamilton said.

“Looking at it in the future, I don’t see a way out. Yes, we do get a bit here and there from the locals but that is mainly on a weekend … But other than that, during the week, it’s actually a ghost town in the restaurant - nothing going on, it has actually hurt us very bad,” he added.

While the Pussers’ seated-dining service is taking a hit, the take-out service that is also being offered is keeping the business afloat.

Hamilton said he associates the increase in take-out customers with a decrease in dine-in restaurant-goers.

“We have high traffic when it comes to take-out but … normally if we didn’t have a striving take-out business then I assume that they would be sitting in the restaurant,” the Pusser’s manager explained.

“The sit-down aspect of the restaurant is hurting, but the take-out part of it is doing pretty good and I commend the locals for their support and patronage to Pusser’s and I can’t ask for more,” he added.

Hamilton further said Pusser’s in Myett’s, Cane Garden Bay and at Soper’s Hole, West End were also feeling the effects from COVID-19. He said that the two locations have been taking multiple measures to increase local traffic, including the increase in advertising and discounted rates on several items on their menus.

Over at Village Cay, Hotel Manager Maureen Morrison-Jones said all three aspects of the business - the hotel, its marina, and its restaurant service - have been significantly impacted.

She said management had to return to the proverbial drawing board to help boost business during these difficult times.

“With the restaurant, we are getting small base foot-traffic; not a lot because since the opening we find that quite a lot of competition has been around so we have to be going outside of the box and be creative to see how the restaurant can take itself out of the water,” Morrison-Jones said.

“That mass traffic that we’re used to having; we don’t have it anymore. So, what we have to do is just be creative and try to improvise, especially on local dishes and do a lot of food advertisement, just letting persons know that business is open,” she further explained.

Bakery formed out of COVID

Jones also said a new aspect of the business - a bakery which was birthed as a result of COVID-19 - is becoming increasingly popular among locals.

She said this is the second time that a new venture has resulted from a disaster - the first being its conference room, which was created following Hurricane Irma in 2017. That, too, has been described as a success.

“We have created out of this COVID-19 what is called a little bakery which is going good. Locals are patronizing [because of] the way in which we make the local breads. So we find that one person tells another and we find that every other day we have to bake more,” Morrison-Jones stated.

A Taste of India – Minimal activity

In the meantime, Operations Manager of ‘A Taste of India’, Noumi Prasad said his business has been devastated by the pandemic.

“Since COVID-19 came, we lost everything. Before the curfew, we were getting very less amount of customers and since we reopened, we are not getting that much business that can cover our expenses.”

“Some days we have a couple tables dining and a few takeouts’ only. We didn’t see any big activities. I don’t think we are having not more than six or eight people in a night when we are busy still,” he further detailed.

To increase activity, Prasad said that measures are being taken to attract more locals to the restaurant.

“We are trying to post on Facebook, we are doing lunch specials also - which are at reasonable prices to serve all the locals. But, in the night, we are doing our authentic regular menu. But still we are planning to do something a little different so we can attract some more locals,” he added.

With this decline in business, Marziali said she believes proprietors should be more lenient with rent to allow businesses to be able to employ at least an additional employee.

“I think the government did a lot to just let us reopen. If the landlord put down the rent, it would help everybody to be open and to bring jobs for everybody else because if you remove $1,000 from the rent you can bring a job for somebody,” she said.

With no set date or announcements from the government regarding the reopening of local borders to international arrivals, the future of a number of these businesses will remain in doubt.

Until then, the only way forward will be to tailor their businesses to attract local traffic to guarantee revenue.
#COVID-19  #Covid
Add Comment