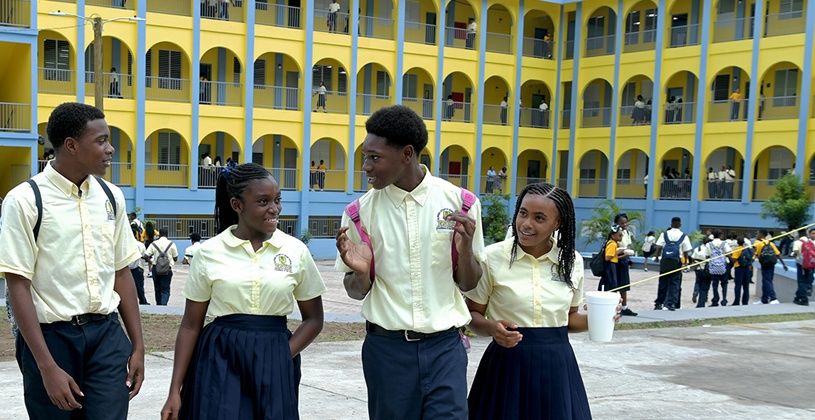 Seniors of the Elmore Stoutt High School (ESHS), still housed at the old Clarence Thomas Ltd. (CTL) building in Pasea Estate, are expected to move back to campus by next Spring.
Premier and Minister for Finance, Hon. Andrew Fahie gave that indication during a contract signing ceremony for the repairs of the Long Trench slope stabilization and road rehabilitation project on Tuesday, August 10.

“The project with the moving of our children, our seniors and also the teachers and support staff from the CTL building to the Elmore Stoutt High School campus is a project that is already on the way, which we will be moving very swiftly with, with a projected date of completion by the end of April 2022,” the Premier said.

He continued: “That is long overdue and I must publicly thank the Recovery and Development Agency (RDA), and the Ministry of Finance and the Minister for Education and his Ministry for making this project a high priority, and also for ensuring that it is not just talk but action.”

In April 2019, the newly installed Fahie-led administration awarded contracts to four companies to refurbish a floor each of the L-shaped building, now renamed the L. Dorothy Turnbull building of the Road Town-based ESHS campus, to the tune of $3.7 million.

Upon completion, the junior students moved from the old CTL building into the refurbished building for the commencement of the 2019 school year in September.

It is important to note that the Virgin Islands Party campaigned heavily on the school in the lead up to the February 2019 general election. At the time, a major billboard was even erected, reflecting their “Vote for VIP for change and renewal” campaign.

The ousted NDP administration got major blows for not rebuilding the same school after the 2017 hurricanes ravaged the school’s infrastructure and the rest of the territory.

However, since the L. Dorothy Turnbull building was refurbished in 2019, nothing more has been done to the other buildings that make up the campus.

Meanwhile, it has been announced that the Minister for Education, Hon. Dr. Natalio Wheatley is slated to provide an update on the new school year at 8:00 pm today.
#the Virgin Islands  #Fahie
Add Comment