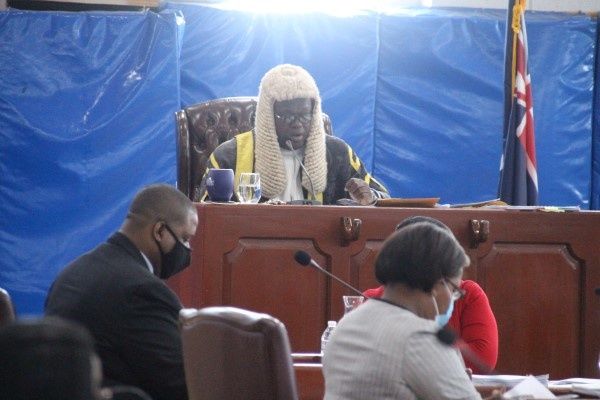 Speaker of the House of Assembly, Hon. Julian Willock has opined that except for medical and religious reasons, the COVID-19 vaccination in the British Virgin Islands should be made mandatory. Hon. Willock’s statement was made during the House of Assembly on July 29, 2021.
“I have listened keenly to the national debate about being vaccinated or not. I speak here for myself to say, I fully support vaccination, as while it cannot prevent you from getting COVID-19, all the research and statistics have proven in a compelling way that those who are vaccinated have an over 90% chance of surviving the deadly disease.”

He continued: “My heart goes out to those who have lost loved ones, it is my personal view that if for medical or religious reasons one cannot take the vaccine, that decision must be respected; however, I strongly believe, taking the COVID-19 vaccination should be mandatory for all others.”

The Speaker made it clear that he was speaking for himself and not for the House of Assembly nor the Government of the Virgin Islands.

“It is my personal view. Two exceptions; medical or religious reasons. If one does not fall in any of those two categories, it is my humble position that taking the vaccine should be mandatory. This is the personal opinion of the Speaker,” he reiterated.

The Government of the day has continuously insisted that the jabs would not be compulsory, but it is becoming more and more difficult for unvaccinated people to remain employed.

It was just yesterday, August 5, when St. Vincent and the Grenadines Prime Minister was injured during a violent protest in his country over a proposed amendment to the Public Health Bill.

The Vincentian Prime Minister explained that he believes that there is a misunderstanding with the proposed amendments. “I think the issue which some persons completely misreading what we are doing is that they are saying that this is to make mandatory the vaccine, but that is not the case as I have explained it. Indeed already on the law, there is a provision to make vaccines mandatory; the provision in the 1977 Public Health Act, but we have not used that provision, and we do not intend to use that provision.”

However, some Trade Unionists argued that it was his administration’s way of making the COVID-19 vaccination mandatory for some category of workers, which has been met with push backs from some quarters, resulting in the protest action.
#the Virgin Islands  #Vaccines  #COVID-19  #vaccine  #Covid
Add Comment