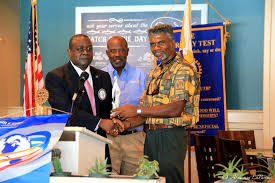 While walking down Main Street last week, Matthew Hart needed two dollars, he said. So, he walked to Bamboushay and asked the assistant manager, who was working behind the bar, if he could borrow the money.

In a Tuesday hearing at Magistrates’ Court, Crown Counsel Annjel Flax Solomon alleged that Mr. Hart had stolen $40 from the tip jar at the bar’s counter. Mr. Hart, however, insisted that he took far less than $40, and that the whole ordeal was a misunderstanding.

Eventually, Magistrate Ayanna Baptiste DaBreo took Mr. Hart’s side and let him off with a warning. Now, finally, BVI courts can start dealing with $3 and $4 dollar cases...

According to Ms. Flax-Solomon’s initial allegations, after Mr. Hart asked the bartender if he could have $2, she later noticed that the tip jar was empty even though it previously contained a $10 bill.

A review of the CCTV tape clearly showed that Mr. Hart had “placed his hand in the tip jar, took a handful of money and walked away,” according to the Crown’s allegations.

In the same allegations, Ms. Flax Solomon said that while being interviewed by police on Dec. 7, Mr. Hart claimed he had acted out of confusion.

Mr. Hart “stated that after he requested $2, he received the reply of ‘go ahead,’ and he didn’t know if this meant ‘don’t take the money’ or ‘go away,”’ read Ms. Flax Solomon.

The defendant readily admitted to police that he had taken the $2, she said.

These allegations presented a discrepancy to what the court had already heard, according to the magistrate.

While she responded to the Crown’s allegations, Mr. Hart repeatedly asked to be given community service.

Ms. Flax Solomon and Mr. Hart then stepped outside together, and when they returned, the prosecutor recommended that the complaint be amended to state that Mr. Hart stole only $2 instead of $40, as the CCTV footage would be able to prove that this is true, she said.

Ms. Baptiste DaBreo accepted this amendment, though she impressed upon Mr. Hart that the Virgin Islands takes the crime of theft seriously, as evidenced by the maximum penalty of two years of imprisonment.

Given Mr. Hart’s circumstances, Ms. Baptiste DaBreo said that community service would be a fitting punishment, though she did not think that it could be feasibly arranged at this time, since court-ordered community service requires adequate supervision and she did not want to place that burden on the Department of Health and Social Development, she said.

Instead, Ms. Baptiste DaBreo decided to let Mr. Hart go free, warning him that he would be punished far more severely if he returned to court with a similar charge.

“If you are brought back into court for a similar offence, you are not going to be treated as lightly,” Ms. Baptiste DaBreo said, adding, “If you want to do some community service for your country, you are free to do so.”