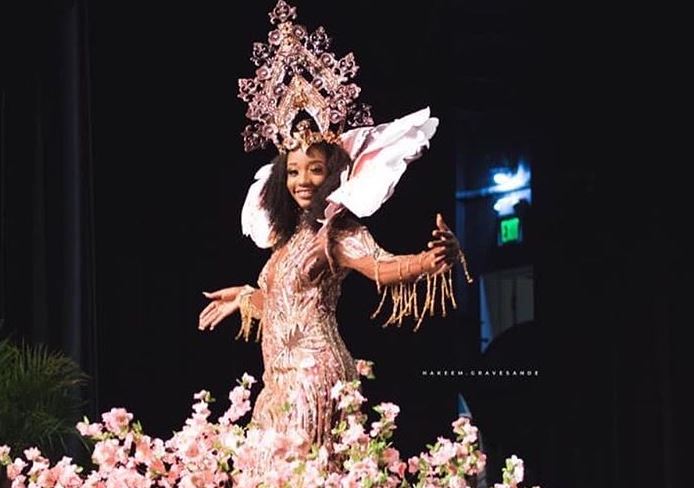 In an exclusive interview with BVI News on Sunday, the 26-year-old fashion designer said the ‘White Cedar Tree’ costume “was a lot of work”.

“I think the costume took a month-and-a-half to make. It was a lot of details with thousands of rhinestones. Even the flowers has rhinestones and sequins to make it all shimmer,” Madray said.

He continued: “It took a team of five persons to actually produce it. The body of the costume represents the tree, and the bottom represents the beauty of all the flowers in ombre from yellow to shades of pink to white. I think it is absolutely beautiful.”

Not the first BVI client

In the meantime, the young designer said Smith was not his first BVI client.

“I am very au fait with the white cedar tree and how it is part of the BVI for doing past pieces for clients in the BVI, and so I was very excited to make this happen. I have been designing for 10-plus years [and] it is not my first time doing Miss Universe,” stated Madray, who said he also designed the gown and national costume for the former Miss BVI, Erica Creque, when she participated in a previous Miss Universe pageant.

According to the Miss BVI Facebook page, the “two-in-one national costume” is the territory’s national tree, the White Cedar.

“The White Cedar or Tabebuia heterophylla is the native cedar on the British Virgin Islands. It is a small to medium-size, mostly deciduous tree with showy pink flowers. It grows on any soil type and will adapt to poor or degraded soils if moisture is available. Valued as a timber tree, it has been widely planted for both reforestation and ornamentation,” a statement from the aforementioned social media page said.

“However, the significance of the tree stems from the importance of its wood, which was used to make the stern, stern posts and frame of our famous Virgin Islands sloops. Used in the 19th century as the only means of transportation between the Virgin Islands, sloops were the backbone for BVI economy for over 100 years,” it added.

Meanwhile, Zozibini Tunzi from South Africa has been crowned the 2019 Miss Universe.

The crowning took place inside the Tyler Perry Studios in Atlanta, Georgia in the US on Sunday night.