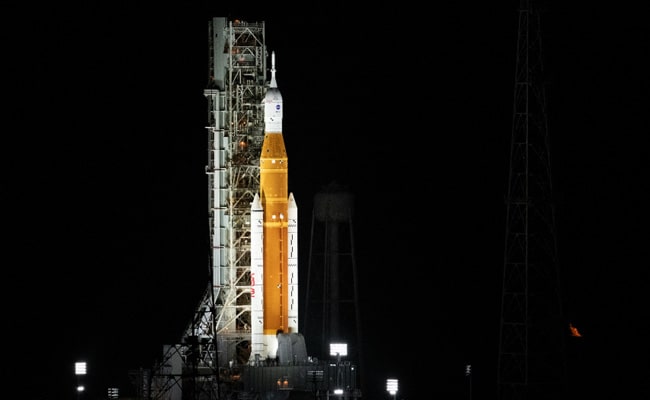 The SLS rocket's four-mile (six-kilometer) journey from the Vehicle Assembly Building to the Kennedy Space Center's Launch Pad 39B took nearly nine hours, NASA said.
NASA rolled out its largest-ever rocket to a launch pad in Florida on Friday and will try again 10 days from now to blast off on a much-delayed uncrewed mission to the Moon.

After two launch attempts were scrubbed this summer because of technical problems, the rocket returned to the Vehicle Assembly Building to protect it from Hurricane Ian.

The US space agency used the time to carry out minor repairs and to recharge the batteries that power systems on the Space Launch System (SLS) rocket.

The 322-foot (98-meter) rocket was rolled out slowly on a giant platform known as the crawler-transporter designed to minimize vibrations.

If the rocket blasts off on November 16, the mission would last a little more than 25 days with the crew capsule splashing down in the Pacific Ocean on December 9.

The highly anticipated uncrewed mission, dubbed Artemis 1, will bring the United States a step closer to returning astronauts to the Moon five decades after humans last walked on the lunar surface.

The goal of Artemis 1, named after the twin sister of Apollo, is to test the SLS rocket and Orion crew capsule that sits on top.

Mannequins equipped with sensors are standing in for astronauts on the mission and will record acceleration, vibration and radiation levels.

The Orion capsule is to orbit the Moon to see if the vessel is safe for people in the near future. At some point, Artemis aims to put a woman and a person of color on the Moon for the first time.

And since humans have already visited the Moon, Artemis has its sights set on another lofty goal: a crewed mission to Mars.

During the trip, Orion will follow an elliptical course around the Moon, coming within 60 miles (100 kilometers) at its closest approach and 40,000 miles at its farthest -- the deepest into space ever by a craft designed to carry humans.

Brad 25 days ago
Correct they cannot travel past the upper limit of 350 miles above earth. 1000 miles Van Allen belts.
Space is a vaccum no atmosphere to burn man made fuels. Space is to cold and hot no know materials on earth can leave earth. No signal transmission can pass through radiation of 4,000 degrees Fahrenheit temperatures of the Van Alan Belts
Ceramic melts at 3,200 degrees no materials know to man can survive period more propaganda from the waist full government lining family members pockets.

CIA Buys News” Ulfkotte goes over how the CIA along with German Intelligence (BND) were guilty of bribing journalists to write articles that either spun the truth or were completely fictitious in order to promote a pro-western, pro-NATO bent, and that he was one of those bought journalists.

Ulfkotte finally built up the nerve to publish the book, in response to the erupting crisis in Ukraine stating

I am deeply worried about the Ukrainian crisis and the possible devastating consequences for all of Europe and all of us…I am not at all pro-Russia, but it is clear that many journalists blindly follow and publish whatever the NATO press office provides. And this type of information and reports are completely one-sided”.

“I am ashamed of it. The people I worked for knew from the get-go everything I did. And the truth must come out. It’s not just about FAZ, this is the whole system that’s corrupt all the way.”

Udo Ulfkotte has since passed away. He died January 2017, found dead in his home, it is said by a heart attack. His body was quickly after cremated and thus prevented any possibility of an autopsy occurring.

In another interview Ulfkotte stated:

The articles appeared under my name several times, but they were not my intellectual product. I was once approached by someone from German Intelligence and the CIA, who told me that I should write about Gaddafi and report how he was trying to secretly build a chemical weapons factory in Libya. I had no information on any of this, but they showed me various documents, I just had to put my name on the article. Do you think this can be called journalism? I don’t think so.”

Oh ya 25 days ago
Sending this thing up to measure how much radiation there is going through the Van Allan radiation belt as they have never sent a man through it before. If you believe they did before you drank too much government kool-aid. Stanley Kubrick was a great film maker. And remember your cell phone has more computing power that the computers back then.
View all comments (2)Add comment