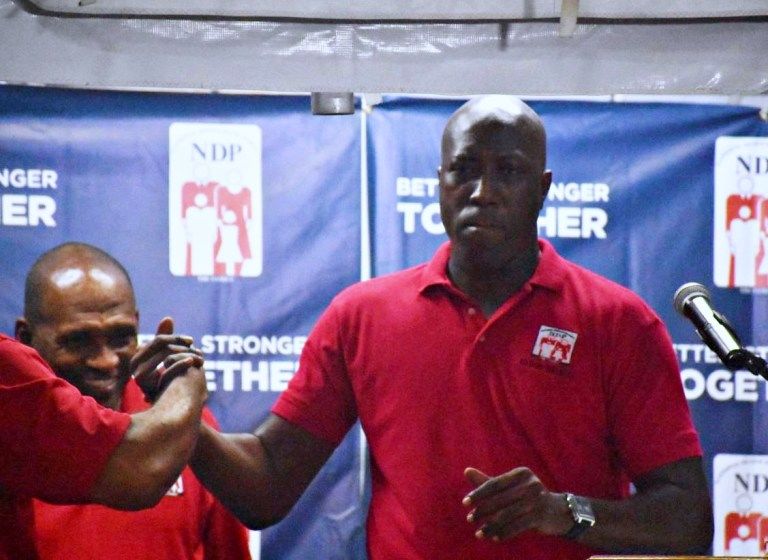 NDP throws full support behind Walwyn in wake of his arrest

The National Democratic Party (NDP) has thrown the full weight of its support behind its embattled former chairman Myron Walwyn who served within the previous NDP government as Education Minister.

The party issued a statement yesterday, November 23 expressing unequivocal solidarity with the former chairman and said it has now properly considered the announcement of his arrest.

Walwyn was arrested and charged weeks ago for the offence of Breach of Trust in relation to the controversial construction of the Elmore Stoutt High School (ESHS) perimeter wall.

But according to the party’s statement, Walwyn has been a trusted member of the NDP since he first joined in 2010. It further said that as a member of the NDP, Walwyn has always demonstrated consistency in good character and during his tenure as minister, he ensured that his actions and intentions were morally aligned.

Adding a disclaimer, of sorts, in its message of support, the NDP said it did not wish to prejudice the ongoing legal matter out of respect for the justice system. “Nonetheless, the National Democratic Party wishes to make it clear that we stand by the significant contributions made by former Minister for Education, Youth Affairs and Sports, Honourable Myron V. Walwyn, towards the development of the Virgin Islands, and in particular, within our education and culture sectors,” the NDP stated.

Walwyn had issued a statement of his own in the wake of his arrest which was condemned by the Office of the Director of Public Prosecutions (DPP) as having the risk of swaying a potential jury pool.

According to a Facebook post issued by the DPP’s Office, Walwyn’s press release not only serves to adversely affect a likely trial but also “serves to undermine the course of justice in the territory”.

In the meantime, the NDP described Walwyn as a proven leader and an outspoken and active advocate for the BVI’s youth, national pride, and for democratic principles and policies. “In that vein, he has worked diligently to advance our education system, and develop our culture, and our national pride and awareness,” the party stated.

Commenting further on Walwyn’s contributions to the education sector, the party noted that the former minister also worked alongside various experts to develop special education within the territory, adding that he believes every child should be allowed to learn and thrive.

“He has made the right to a quality education a reality for all Virgin Islanders and has championed and prioritised safety in the school environment,” the NDP said while noting other achievements.

The statement added: “We fully expect that in the matters surrounding the Elmore Stoutt High School wall project, his claims of innocence will be vindicated by the courts. We also look forward to, should he so choose, welcoming him back as a party candidate, to contest the next general elections.”

Walwyn resigned as chairman of the party following its loss at the 2019 elections, leaving current Health Minister Marlon Penn as the only elected official remaining with the party once Sixth District Representative Alvera Maduro-Caines crossed the floor.