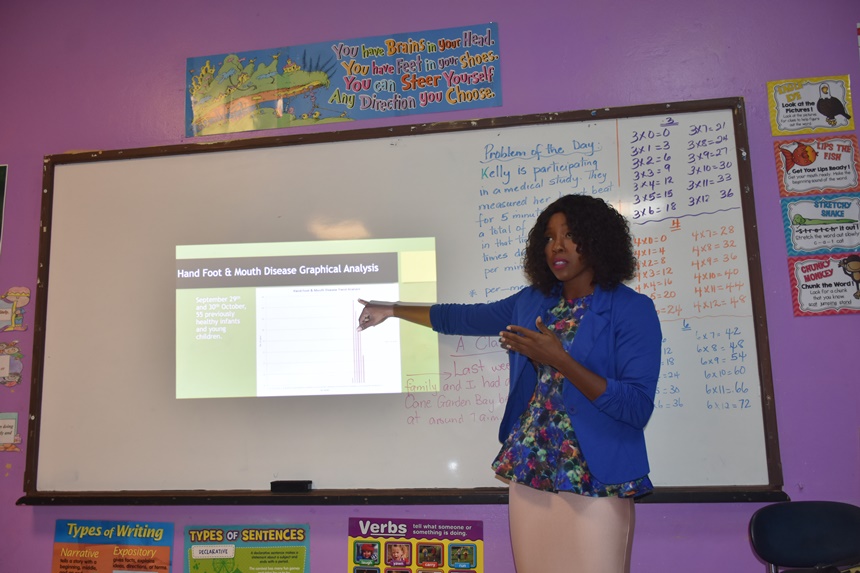 Coming off the heels of news that more than 10 daycares are grappling with the Hand-foot-and-mouth disease, health officials have confirmed nearly 60 cases in the last five weeks.

Speaking at the first community meeting about the disease at the Ebenezer Thomas Primary School on Thursday, October 31, National Epidemiologist Harmony Brewley said the local cases have been increasing rapidly and have not only affected children.

With one adolescent in territory contracting the disease, the concern — particularly among local health officials — have grown.

“The reason why this is important is because adolescents don’t usually develop symptoms or show symptoms of Hand-foot-and-mouth disease. We (adults and young adults) are usually asymptomatic carriers, meaning that you might have the virus within your body but you might not be showing outward symptoms that you have the disease,” Brewley explained.

She noted a new strain of the disease which is having a greater than usual impact on victims. And in some instances internationally, this new strain has resulted in death, she said.

Not just the BVI

On that point, Brewley noted that the disease is affecting several countries including some in the region.

“There have large outbreaks almost every three years in the United States, they have recently discovered a new strain of Hand-foot-and-mouth disease in Virginia,” she said.

“We have very large outbreaks in Asia and along that south pacific region and many Caribbean countries such as Grenada, Dominica, the Dominican Republic, Antigua and even this week St Lucia put out an alert that there are seeing an outbreak within their schools,” Brewley added.

Meanwhile, Chief Environmental Health Officer Lionel Michael explained the many preventative practices parents and daycare owners can adopt to help in reducing the spread of the disease.

Of the many measures listed, he said the frequent and thorough washing of one’s hands is extremely important.

“Handwashing is probably the single most important thing that we can do to prevent diseases. We can prevent a multitude of diseases by simply washing our hands regularly and thoroughly,” Michael stated.

Thursday’s meeting was spearheaded by the Ministry of Health, the Environmental Health Division and the BVI Health Services Authority.

The second meeting which is designed to target stakeholders in the Towers, West End and Carrot Bay areas is on Friday, November 1 at the Leonora Delville Primary School. That meeting starts at 5:30 pm.
Add Comment