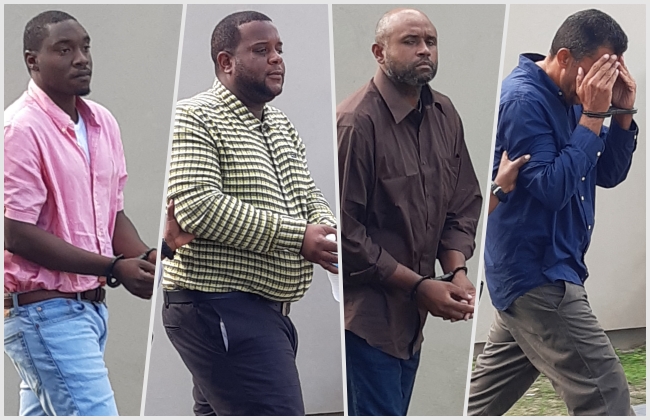 New evidence and an additional charge being laid have resulted in yet another delay in the trial for the four men accused of importing $30.9 million worth of cocaine in the BVI back in 2019.

But, ‘possession of a controlled drug with intent to supply’ has now been added to their charge sheet.

Their trial was scheduled to run from January 18 to 20 before Magistrate Tamia Richards. However, their attorneys were last week caught off guard with the new charge, which comes nearly 15 months after the first court appearance.

Attorney Chesley O’Neal Hamilton who flew in from St Kitts & Nevis for his client Browne, argued that the new charge should have been laid before the courts long before the day of the trial.

He said the case had been called several times before but adjourned on each occasion. The attorney further said he believed the Crown could have presented the charge on either of those occasions to give the Defence ample time to fairly represent their clients.

O’Neal Hamilton said though it was within the legal right of the Crown to add a charge within the two-year statute, he believes that the manner of which the Crown abruptly presented the new charge without prior disclosure was not fair and could amount to an unfair trial.

He, therefore, called upon Magistrate Richards to frown upon the actions of the Crown, as the new charge of possession was not a subsidiary charge but one that is substantive and greatly alters the level of preparation and research needed to effectively represent his client.

Defence was ready as ordered by Magistrate

Jones also alluded to the previous October court sitting where the presiding magistrate at the time — Christilyn Benjamin — urged him and the other defence attorneys to prepare for trial to commence by the 18th.

Jones said he was in full compliance and said he went a step further by visiting and calling the Office of the Director of Public Prosecution on several occasions to inquire whether more charges were brought against his clients. He was told ‘no’ on each occasion.

O’Neal Hamilton, Jones, and attorney Reynela Rawlins – who represented Simon – took a brief recess to consider whether to proceed to trial with the new charge the following day.

They all agreed in favour of commencing the trial, and all four defendants were allowed to enter a plea. The men all pleaded not guilty to both charges.

However, while proceeding to exit the compound of the Magistrate’s Court, the three attorneys were met with another disclosure containing new evidence from the Crown.

This new information was described as critical evidence from a US customs officer. This resulted in the case being adjourned to May 17, 2021.