The government today unveiled the new statue of the late former Chief Minister Cyril B. Romney; aptly located at the pier park which is already named in his honour.

Along with the late Romney’s statue, a new ‘BVI’ sign was also unveiled.

Speaking at the unveiling ceremony earlier today, Junior Minister for Tourism Sharie deCastro spoke about the impact the late Cyril B Romney had on tourism in the territory and the overall advancement of the Virgin Islands.

She described him as a visionary Virgin Islander who helped build the territory people know today.

DeCastro said the pier park carries on the rich legacy of the former Chief Minister.

“Every time we pass this place and many others we acknowledge and honour the person after who it is named, and we think about the legacy and contribution to the development of these Virgin Islands. By doing this we are inspired by what they have done, and we ensure that younger generations of Virgin Islanders remain proud and inspired by a Virgin Islands’ stalwart because they stand as constant reminders that our people are capable of achieving great things,” deCastro said.

“As we assess the magnitude of what it means, we must appreciate the statue that persons must have when we name our important place and buildings after them,” the junior minister said.

The statue’s unveiling marked the sixth anniversary since the pier park was renamed the Cyril B Romney Tortola Pier Park to honour the late former Chief Minister.

DeCastro noted the facility is a crucial part of the territory’s tourism infrastructure and product.

“It is the port through which thousands of valued visitors enter into and depart our shores. Of course, tourism is one of our main economic engines that provide an inflow of revenue for the government, create economic activity for a large section of our population and drive commercial activities throughout the entire territory,” the junior tourism minister stated.

“The fact that tens of thousands of visitors pass through this facility annual, mainly but not exclusively from our cruise sub-sector signals the importance of this facility to the sustenance of the Virgin Islands and its people,” she continued.

Meanwhile, Premier and Minister of Tourism Andrew Fahie heaped praises on the late Romney and stated he was a politician who knew how to lead his people.

“Anything new would always create some disturbance but C.B Romney knew to lead you had to put your country and yourself in an uncommon territory in order to get something new. Too many of us want to lead and keep things the same way and expect to get new results and will never get anywhere. Romney understood how to bring people along,” the Premier said. 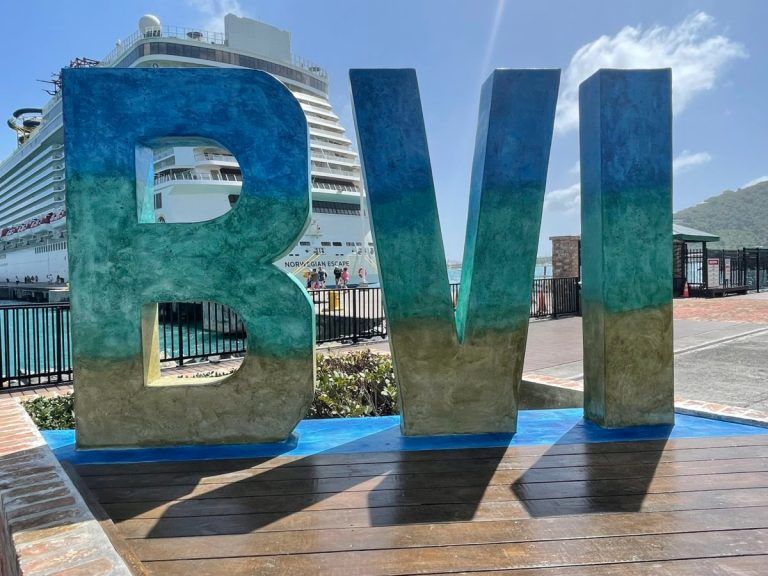 This ‘BVI’ sculpture is located at the Cyril B Romney Tortola Pier Park.