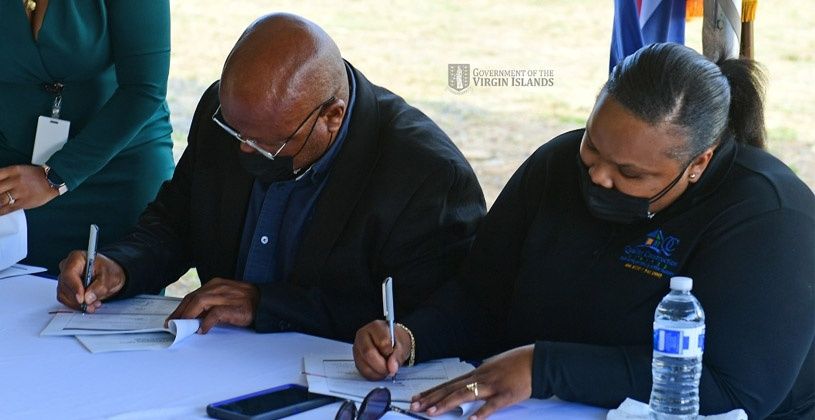 Not An Election Project

Four contracts have been signed for the redevelopment of the Elmore Stoutt High School project which is projected to be completed in time to have students and children return to the campus for the start of the new school year in September.

Premier and Minister of Finance, Hon. Andrew Fahie stated that the redevelopment of the ESHS campus is not an election project.

"This project did not drop from the sky. You would have heard the timelines in getting to this time and know it did not just start. For many years there have been talk and talk and more talk about the need to develop and expand this campus, but it has only been talk with no action. At one time we were being told that there was a loan for this project and that the money was there. When your Government took office and checked we could find no evidence of this. There was nothing there," Premier Fahie stated.

Premier Fahie outlined that thee have been 'doubting Toms', but history will acutely recall who built with a purpose and with quality and who did not after the hurricanes of 2017. He said there were designs that were passed around, but persons who were in position to get the campus redevelopment done did not.

"But then some of those designs were not suitable to stad up to hurricanes. Since 2017 and beynd and with climate change we are seeing hurrcianes becoming more frequent and more fierce. Those designs were also not suitable for teh challanges we are now facing today such as COVID-19 whch requres dfferent physical layouts and catering for the gerater use of technology," Premier Fahie stated.

Students and teachers were displaced from the campus following the hurricanes of 2017 that saw the destruction of the buildings. This led to the temporary relocation of the school that brought with it complaints about the conditions of the temporary housing. The works are set to commence tomorrow, April 4.

Minister of Education, Dr. Natalio Wheatley said he is anxious to see the work done.

"I am almost emotional thinking about the difficult time that our teachers and students have had to endure since the hurricanes of 2017. These would be the first buildings which will be completed by God's grace and mercies since Lavity Stoutt built this building in 1995," Dr. Wheately stated.

He added, "And it's going to be a joy; it's going to be a day of jubilation to see these young people leave from some of the conditions that they had to endure into accommodations that are more suitable and conducive to learning. These buildings wouldn't solve all the challenges that we have, but it will go a long way in getting us to where we need to go. It's a huge step in the right direction and I thank all persons involved and look forward to this project coming in on time and on budget."

The Minister further explained that there were some grand plans, including a new school upwards of $40M; however, he indicated that those plans would have taken time and money and they would not have the possibility of opening school.