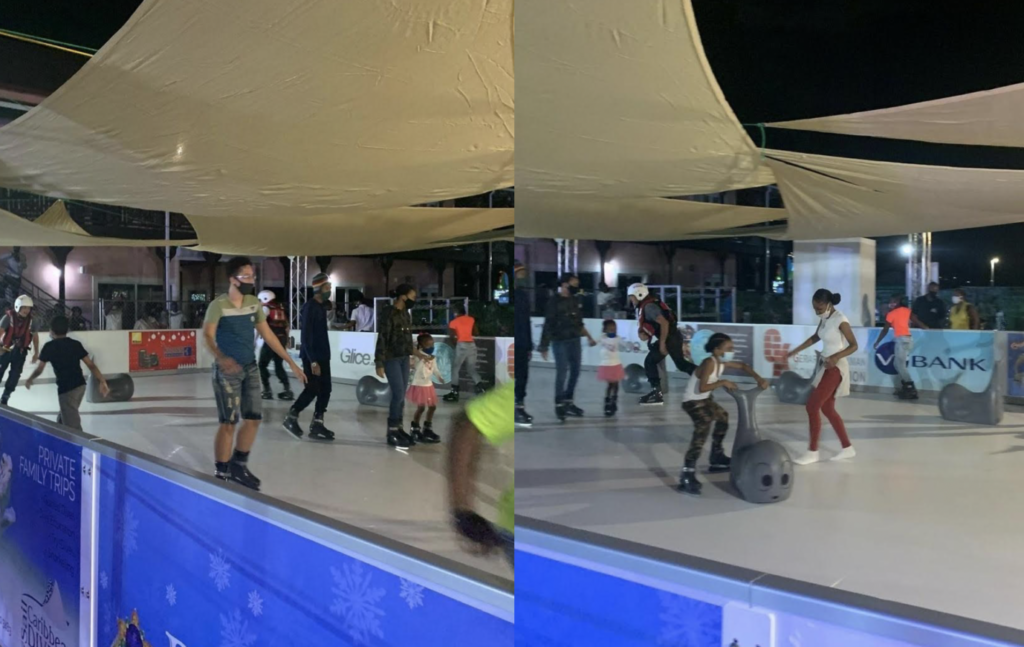 The opening of the territory’s first-ever synthetic ice-skating rink was considered a success as it welcomed in excess of a hundred patrons at the Virgin Islands Search & Rescue’s (VISAR) Winter Wonderland at the Cyril B Romney Tortola Pier Park throughout the weekend.

VISAR’s Executive Creative Director Julie Schneider told BVI News the demand to participate in the rink resulted in consecutive days of the activity being sold out.

She said due to the COVID-19 pandemic and protocols, a maximum of 20 persons are allowed per session which lasts for 30 minutes. After each skate, the rink undergoes a 15-minute turnover session which involves sanitary cleaning.

“We had about 80 people on the rink on Saturday throughout the four sessions and we booked a good amount of future sessions as well, and the age ranges were from about four years old to persons in their 60’s,” Schneider stated.

She added: “Last night we had four sessions and all of them were sold out and it was received really well. We had a parent and a child come off the rink and both responded it was so much fun. So the dad had just as much fun as the little one and I walked past a few patrons who said it’s just so nice to see kids smiling and having fun again.”

In addition to the response to the rink, Schneider said the booths have also been reaping success with a lot of activity resulting from the flow of traffic.

“The merchandise booth; we did really well last night. It was really great to see the little kids walking around with the headbands on and the Santa hat … The merchandise booth has VISAR-branded gear like T-shirts and sweatshirts and holiday antlers and headbands. And then we have little craft kits that kids can view while they wait. The other booth starting next week will sell popcorn and cotton candy, and then Myett’s is doing refreshments.”

The purpose of the fundraising event is to raise money for VISAR intended projects and initiatives which will benefit the people of the territory.

Schneider said proceeds from the rink and the booths will go towards securing a vessel intended for the sister island of Virgin Gorda.

“We had a different goal in mind before COVID and now with COVID, we are just happy to be able to bring the rink to the community and let them have a good time. We do have a balance of $100,000 left to pay for a rescue vessel for Virgin Gorda and anything that we make this year will be going towards that boat and we will be happy with any amount that we make,” she stated.

The executive creative director further said the business community has also joined in to enhance the experience of the children. Their contribution comes in the form of a storytime session involving craft where a maximum of 20 children will be allowed to participate in the scheduled activities every Sunday for free.

“I think the first one is going to be a kid’s paint and sip, so they’ll be doing a scene out of one of the books that we read. The second week is Hanukkah. We’re going to be painting dreidels and then reading books about Hanukkah and playing dreidels at the end, and the third one is sponsored by CCT and they’re doing a whole Christmas thing. Then the last one is celebrating Quanta, and each of those events is sponsored by a particular business,” she explained.

The rink will be operating until Wednesday, January 6, 2021.