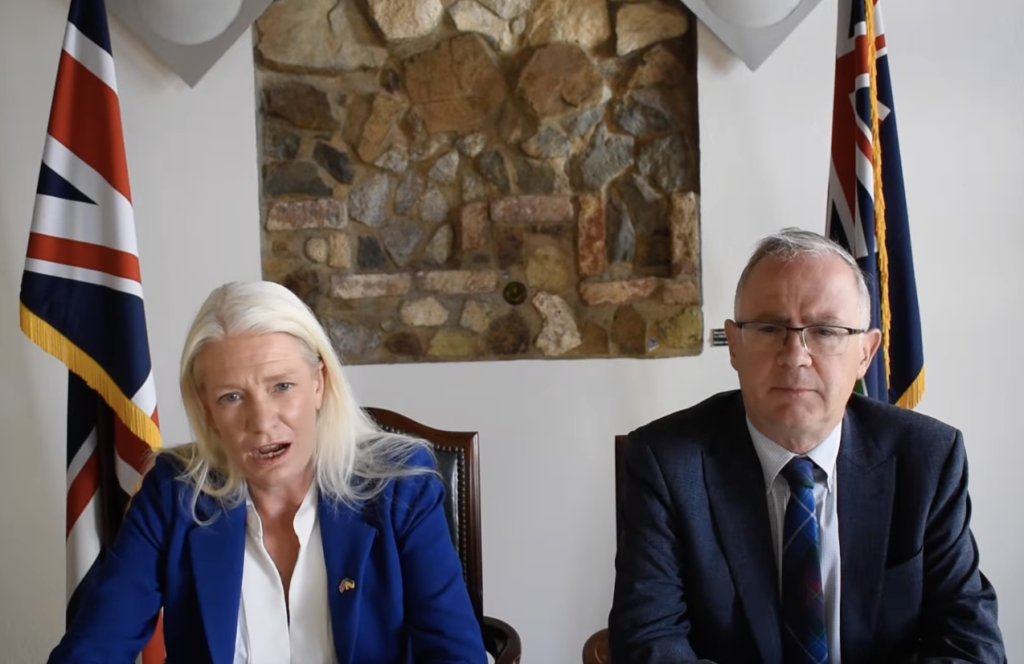 United Kingdom (UK) Overseas Territories Minister Amanda Milling said her visit to the Virgin Islands has now concluded and she will return to the UK to update UK Foreign Secretary Liz Truss on the feedback about meetings and discuss the way forward for the BVI.
She added that she will also have more dialogue with Governor John Rankin and Acting Premier Dr Natalio Wheatley on how to tackle the issues holding back the development of the Virgin Islands.

“This must happen quickly. The people of the BVI deserve no less. You deserve a government which works in everyone’s interests, not just those of a few. A system which promotes and protects, not divides, and instils fear. A future which is bright, not overcast by the dark shadows of crime and corruption. I am committed to delivering this in the interests of the people of the BVI,” Milling said.

She noted the recent events in the territory, with the arrests of Premier Andrew Fahie, have been shocking and concerning for everybody. She also highlighted that the Commission of Inquiry Report raised very serious concerns about the failures of governance and dishonesty by local elected officials.

“I have spent the last few days listening to how you feel about the events. We discussed the recommendations from the Report. And I heard what you think is needed — which is putting the best interests of the people of the BVI at the heart of any future decisions,” she said in an address to the BVI public

“Let’s be clear – the Report highlighted significant concerns around corruption, transparency, and accountability. There is no getting away from this. Like many people have told me, this isn’t a question of whether something should be done. It is a question of what is done. Action is needed now to: strengthen the foundations of the territory; deliver a better public service; maintain a strong and resilient economy; and create better opportunities for the people of the BVI. This is what I heard you want during my visit,” Milling continued.

The Overseas Territories Minister said that in the last few days, she met with a range of people across the territory including Dr Wheatley, the party leaders and members of the House of Assembly, business, and tourism leaders; some of the most experienced political and public service figures; representatives from the financial sector, church leaders and representatives of community groups.

“My meetings have helped me gain greater insight and understanding of the significant challenges facing BVI. Discussions with elected officials have been cordial but frank. They acknowledged the scale of the issue, and that the road ahead will be challenging. But we all agreed that it is a necessary journey,” Milling said.

“During my discussions with community and religious leaders, I heard about the impact corruption has had on the community here. I sought their views on what would be best for the people of the BVI. Everyone I have met has agreed that there need to be significant changes in the BVI to improve governance,” she added.

The OT Minister said it is urgent that systems, processes, laws, and norms are fixed to ensure that money spent by the government – the people’s money – is better spent on roads, education, hospitals, and better public services and not misused as the COI found out.

“We now have the opportunity to do this. To build a government that delivers for its people in a fair, transparent, and accountable way,” Milling said.
#Commission of Inquiry  #the Virgin Islands  #John Rankin  #Fahie  #CoI
Add Comment