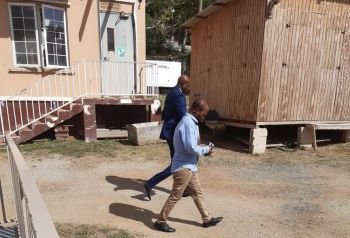 The former controversial Education Minister under the National Democratic Party (NDP) Administration, Myron V. Walwyn who went from being one of the biggest election winners to the biggest loser at the polls, was spotted in the Magistrate’s Court today Tuesday, December 10, 2019, in his capacity as a defense attorney.

The former At Large Representative and ex Chairman of the National Democratic Party (NDP) was representing Dwight Callwood, who was charged for criminal damage after breaking a vehicle’s rear windshield on March 27, 2019.

Prosecutors said the defendant hurled a bottle at the vehicle because the owner passed too close to him and the driver responded by giving him the middle finger.

'He is not a violent man'- Walwyn pleads

Mr Walwyn pleaded with the court for leniency for his client, who he said was not a violent man unless provoked.

He said in this case, Callwood was in fear when the incident occurred because the vehicle was driving at a fast rate and passed near to him.

Mr Walwyn told the court his client is the sole breadwinner of his seven children and is asking the court to be merciful when handing down its sentence.

Magistrate Ayanna O. Baptiste-DaBreo fined Callwood $1500 for the offence. He was told to pay the fine by January 30, 2020 or risk spending four months at Her Majesty’s Prison (HMP) in Balsam Ghut.

Callwood was also ordered to immediately pay $814 for the windscreen or spend two months in prison.

Mr Walwyn became Chairman of the NDP on June 24, 2018 after a nasty fight with former Minister for Health and Social Development Honourable Ronnie W. Skelton, who subsequently left the party to form his own group.

At the helm of the NDP, Mr Walwyn’s team was overwhelmingly defeated at the February 25, 2019 General Elections.

He lost his own seat as an At Large Representative.
Add Comment