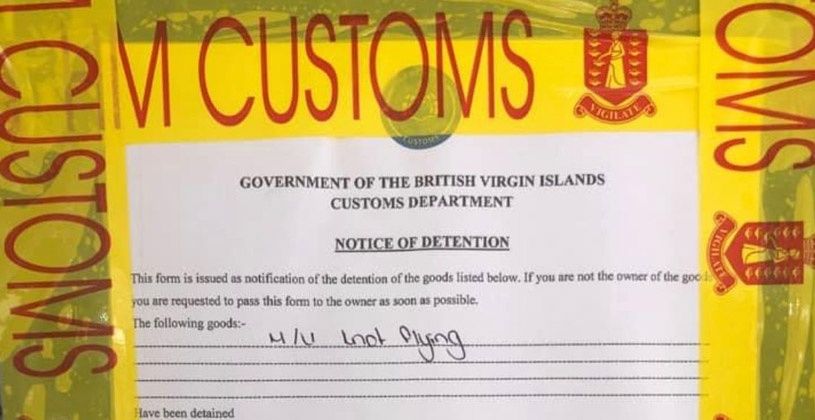 Customs has detained over 100 boats from the Moorings and Sunsail fleet, leaving some charter customers stranded and the company scrambling to make alternative arrangements for incoming guests.
Over eight Customs officers accompanied by officials from the Virgin Islands Shipping Registry (VISR) swooped down on The Moorings Marina, Wickhams Cay II earlier today, March 16 to conduct inspections on the vessels to ensure compliance with commercial licensing and safety certificate insurance.

In a statement, The Moorings said they are aware of various reports regarding Customs regulations causing delays and cancellations for some charter guests arriving to the British Virgin Islands.

"The Moorings and Sunsail have been working closely with the BVI Government in recent weeks to comply with the new changes to these industry-wide safety and documentation requirements, and expect to be fully compliant in the coming weeks," The Moorings stated.

The company stated that in the meantime, a number of yachts in its fleet have yet to receive their updated documentation, and as such are unable to sail.

"This has resulted in delays for some of our guests arriving this week, and we are working to ensure all are accommodated properly. We are actively reaching out to any clients whose upcoming charters may be affected. Please be aware that as part of this process, and to help ensure we can accommodate any guests whose charters are impacted, we are not accepting any new bookings for BVI charters departing prior to April 15," The Moorings stated.

Meanwhile, Sassoon Fahie, Acting Senior Customs Officer attached to the Customs Internal and Compliance Unit, told ZBVI that The Moorings has one of the largest fleets in the BVI and most of the boats were detained for similar issues relating to the absence of safety certificates or not being authorized to be in the BVI.

"From October we had a number of symposiums on what is required to obtain commercial licenses and what is expected for your vessel to be here. A number of these symposiums Moorings attended all so they were aware of what is supposed to be done in order to meet compliance or to get a license. However, these were not met so hence we are here today," Fahie stated.

She added, "The charter season started from November 1 and we are in March so I feel that the department has been lenient and understanding. However, at some point, the department has to take charge and make sure that everyone has a level playing field because we have other operators that are in compliance," Fahie stated.

The charter industry has been critical of the recent increase in patrols and enforcement by agencies, including Customs, regarding compliance with existing laws and regulations.
#the Virgin Islands  #Fahie
Add Comment