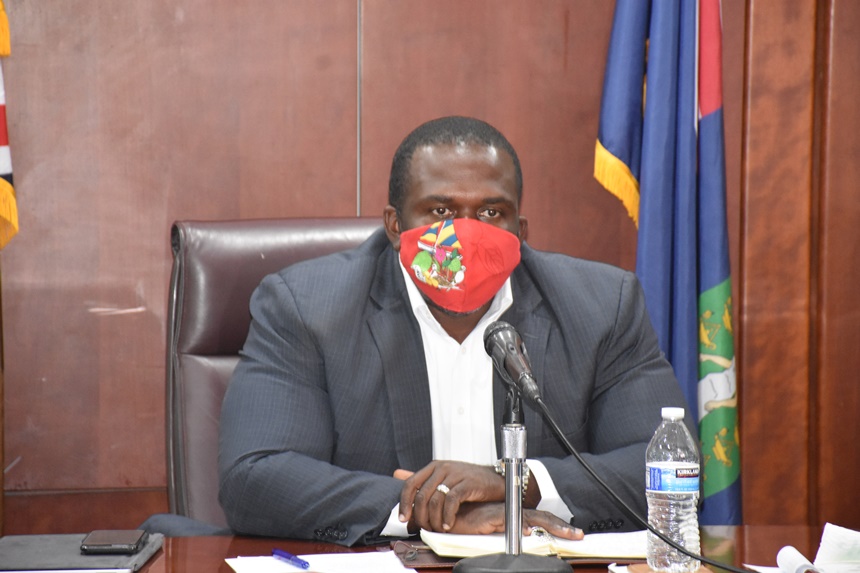 Opposition Leader Marlon Penn came in for considerable flack last evening from government ministers for his stance concerning the Multi-Purpose Sports Complex air conditioning installation contract.
Penn was also accused by a prominent businesswoman, who called into the Virgin Islands Party’s (VIP’s) Let’s Talk radio show, of ‘pulling down’ the successful bidder for the project.

The government signed a $786,000 contract with Quality Air Condition & Refrigeration for the procurement, installation and commissioning of the heat, ventilation and air condition system at the complex in December last year.

Since then, Penn has consistently questioned the government’s actions in selecting a contractor that he said bid more than $300,000 above the only other bidder for the contract.

The businesswoman, a hotelier and close associate of the governing VIP, said Penn allegedly ripped her godson on radio and suggested the contractor should not try to thrive or achieve such a contract.

“This is what we should be encouraging our young people to do, both male and female, and not to put limits on them that this is too high for you so you shouldn’t try to reach it,” the resident said.

According to the resident, Penn’s position was not a good lesson for the young people of the territory.

“This is the kind of encouragement that Honourable Marlon Penn hopes to give the young people of this country and then he is asking the same young people to support him as a leader,” she said.

“What if they said to him ‘no, no, no, no, you reached high enough, you can’t go no higher’? This is terrible.”

Meanwhile, Works Minister Kye Rhymer explained that, of the two bids submitted, one was for refurbishment of the existing AC system while the other was for a replacement of the entire system. He stated that the contract was awarded for the replacement and said this obviously meant there would be some disparity in the bid prices.

Earlier, Education Minister Dr Natalio Wheatley urged that Virgin Islanders shouldn’t descend into the proverbial gutter for the sake of politics and power.

“When you start to slander persons’ character, you cast aspersions on the leader of the country and of a qualified contractor that we all should be proud of, and teach us to be distrustful of each other. This is just exactly what the enemy wants, especially the enemy who wants to take over the BVI and take it away from us,” Dr Wheatley said.

Premier Andrew Fahie, who also waded into the discourse, said he welcomes any scrutiny of the government’s spending and welcomed any investigation regarding the contract.

The territory’s leader said the bids for the AC contract were done through a clear bidding process, independent of any political interference.

He urged Penn, the leader of the Public Accounts Committee (PAC), to request the information and launch an investigation into the matter if he so desired. Fahie even offered to put funding into any investigation that might be called by the PAC.

“There are clear explanations from the technical people on this project that should have been done quite a while ago,” Premier Fahie added.

“Go and do your work and stop destroying local businesses with melee and mischief,” the Premier charged.
#the Virgin Islands  #Fahie
Add Comment