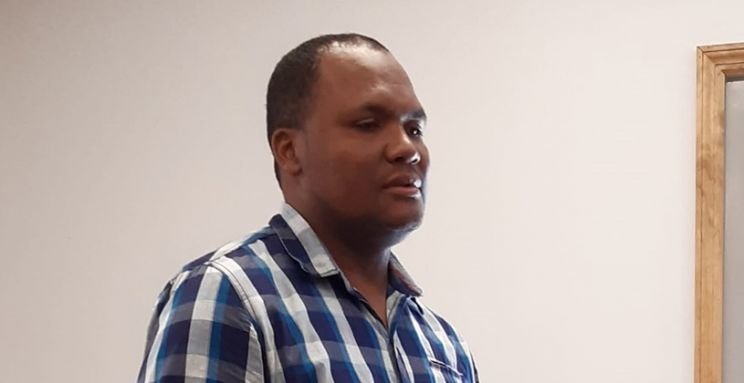 On Thursday, July 2, Magistrate Christilyn Benjamin offered a Dominican Republic preacher $20,000 bail with one signed surety when he appeared before her on Attempted Burglary and Criminal Trespass charges.

Miguel Diaz Aquino, 41, who is unrepresented, pleaded not guilty to the offences. As part of his bail conditions, he must be of good behaviour and not re-offend. He is to report to the Road Town Police Station every Mondays, Wednesdays and Fridays between the hours of 6 am and 6 pm.

His travel documents will also remain in the custody of the police.

The allegations, as read by Prosecutor Annjel Flax, is that the incident occurred on November 17, 2019, and since then he has been on police bail pending his appearance before the court.

Flax said, the Spanish speaking defendant was spotted on surveillance cameras outside the Smith family’s dwelling home in Myer’s Estate on Tortola, while the Virtual Complainant (VC), was in church.

The VC, after receiving the notification from her cameras, notified her grandson and he went to the house to investigate.

Upon arrival, he allegedly spotted and recognized the defendant wearing a blue shirt over his head trying to pry open one of the sliding glass doors at the front of the house using his hands.

When the defendant saw the owner’s grandson, he went to the back of the house and exited the premises.

The defendant allegedly attempted to hide behind a wall on the property of the nearby Enis Adams Primary School.

The owner’s grandson, along with an associate, drove to the schoolyard and caught the accused who had removed the shirt from his head and they reported the matter to the police.

When the defendant was questioned during the investigation, he told police that he was in search of employment at the residence. He is known to do odd jobs to assist with his living expenses.

He was arrested and transported to the Road Town Police Station. Several video clips from the cameras were extracted from the property and during an interview with police, the defendant said he visited the house to search for his boss, who had hired him to do some work for him previously.

Nonetheless, he admitted that he went to the property without permission and used a broom to knock on the window and even used a red ladder to climb on the window to try to open it.

The charges before the court were laid against him at that time. The man of the cloth will return to court for trial on November 9 to 11.
Add Comment