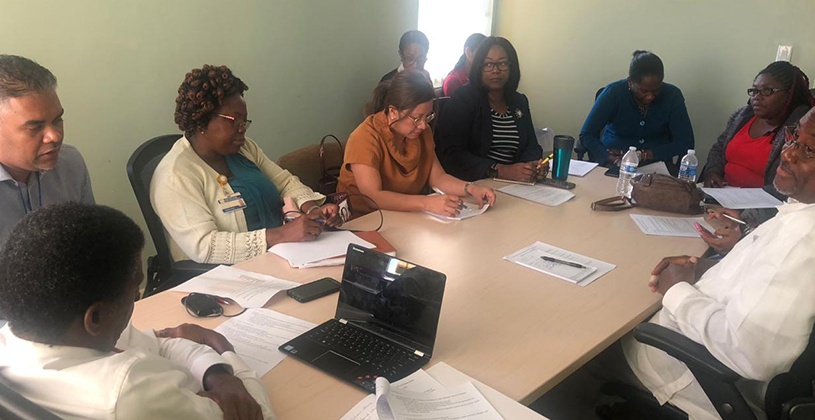 Officials at the Ministry of Health and Social Development have began collaborating with local, regional and international health agencies as a precautionary measure against the coronavirus, a respiratory virus that has spread from China to a half-dozen other countries.

Chief Medical Officer, Dr. Irad Potter stated that the Ministry of Health has been carefully monitoring the situation since the initial reports from Wuhan, China.

“We will remain on the alert as this new coronavirus belongs to the same family as less severe diseases like the common cold and more severe diseases, like the Middle East Respiratory Syndrome (MERS-CoV) and Severe Acute Respiratory Syndrome (SARS)- the latter which killed over 800 people worldwide in 2003. Information-to-date indicates that transmission is through human-to-human transmission, for example, via respiratory droplets from sneezes and coughs and may also be contracted indirectly, through touching contaminated surfaces,” said Dr. Potter.

A new strain of virus that was first reported in China has killed 26 people and infected more than 800. The total number of coronavirus cases in China rose to 830, China’s National Health Commission said on Friday. There are at least 16 known cases outside mainland China, which brings the cases worldwide to 846, according to CNBC’s tally.

Sometimes referred to as the Wuhan virus, it has been temporarily named the “2019-nCoV” and belongs to a family of viruses known as coronaviruses, which can be transmitted from person to person.

The deadly pneumonia-like disease was first identified on Dec. 31 in the Chinese city of Wuhan in Hubei province. It has since spread beyond Wuhan - which has a population of 11 million - to other major cities including Beijing, Shanghai, Macao, and Hong Kong. Outside mainland China, Thailand, Vietnam, the United States, Taiwan, South Korea, Singapore and Japan have reported cases.

The outbreak in Wuhan has been linked to their South China Seafood City, likely indicating an animal-human (zoonotic) transmission, although no animals sampled have tested positive for the virus.

The novel coronavirus, 2019-nCoV has now spread to at least six other countries which are Japan (1 case), Thailand (5 cases), Korea (1 case), Macao (2 cases), Taiwan (1 case) and the USA (1 case). Other countries such as the United Kingdom, Australia, Russia and Saudi Arabia are currently testing suspected cases.

“Despite international cases, the World Health Organization (WHO) has decided not to declare it a global health emergency as it is still too early in the disease outbreak. This however, does not mean that the British Virgin Islands will not take it seriously, as its infectious and contagious nature indicates that spread is inevitable- the extent of which is undetermined,” Dr. Potter stated.

He explained that evidence is still emerging as investigations continue in an attempt to determine whether its severity and lethality is similar to that of SARS. No transmission has been reported in the Caribbean, thus the Virgin Islands’ public is advised to be extra vigilant and take the necessary precautions.

Travelers, specifically those traveling to infected counties, are encouraged to seek information about the current disease situation and remain aware of up-to-date information from the WHO or the Ministry of Health in the destination country.

* Avoid animals (including carcasses), animal markets, and animal products (such as uncooked meat).
* Avoid contact with persons having flulike symptoms, such as fever and cough.
* Wash hands frequently with soap and water for at least 20 seconds. Use alcohol-based hand sanitizer and rub vigorously if soap and water are not available.
* Cover your mouth and nose with a tissue or your flexed elbow (not your hands) when coughing or sneezing.
* Common signs of infection include respiratory symptoms, fever, cough, shortness of breath and breathing difficulties.
*If you traveled to Wuhan or any of the aforementioned locations and have these symptoms you should stay home, avoid contact with others and seek urgent medical care, as severe infection can cause pneumonia, severe acute respiratory syndrome, kidney failure and even death.
*Call ahead of the doctor’s visit or request a home visit and tell them about your recent travel and your symptoms. Also, remember not to travel while sick.