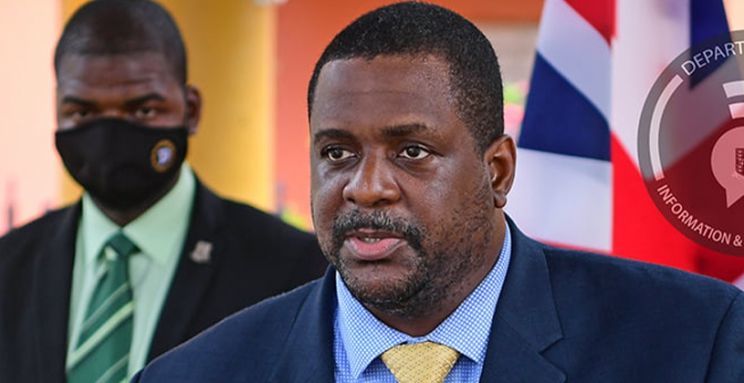 Residents of the sister islands will soon be getting more from their elected officials as Premier and Minister for Finance Hon. Andrew Fahie has ordered all ministers of his administration to hold monthly office hours on the three sister islands.
Premier Fahie was at the time addressing the myriad of challenges that residents of these islands face when trying to get business done on the main island of Tortola.

“So we will have more of our Tortola people coming, and the Deputy Governor and his Permanent Secretary will announce the time scale when all of them are coming over, and every minister and junior ministers have to hold office hours once a month over here, compulsory, including myself,” he said on Tuesday 9th February 2021 during the handover and rededication ceremony of the John E. George Administration Building in North Sound, Virgin Gorda.

The Premier added, “Starting from March, you check and let me know which minister didn’t get over here, including myself, because we are conscious that the people need service.”

He then explained that after travelling from the sister islands to do business, some workers at some government offices and banks are not sensitive and accessible to these persons.

“It’s not easy for Virgin Gordians, Anegadians, Jost Van Dyke people to know that you want to pay a bill with government or register to do things with government and know you have to get up early and catch a ferry, reach Tortola and then some of you have to take a taxi and then you need to get something to eat because sometimes you leave so early you didn’t get something to eat, and then you go to the government facility, to find out that the person who is dealing with it is either out sick, on lunch or in a meeting,” he said.

The Premier said sometimes these residents are told to return the next day and are unable to get their business done.

He said discussions are underway with the banks to also make a special line for these persons.

I told persons one of the times we have to do in the public service is take up some of them and have them work on the sister islands for a month and let them catch the boat and go over, and catch the boat and then come back in the afternoons.

Then is when some of them, not all of them, the majority has the goodness of their hearts to deal with the people of the sister islands, but then there are those few who don’t understand that time is valuable, more valuable to sister islands persons than it is for people on Tortola,” the Premier explained.

He added, “I pray that those persons who work in these department, in these ministries would understand the need to make sure that they are more accessible to the people of the sister islands. I always tell people wrong cannot be right, and right cannot be wrong.”

The Leader of Government’s business said the days of ‘bad treatment’ for these residents is coming to an end as the Government is on the verge of passing a slew of e-legislation to make doing business virtually at the fingertips of residents.
#Fahie
Add Comment