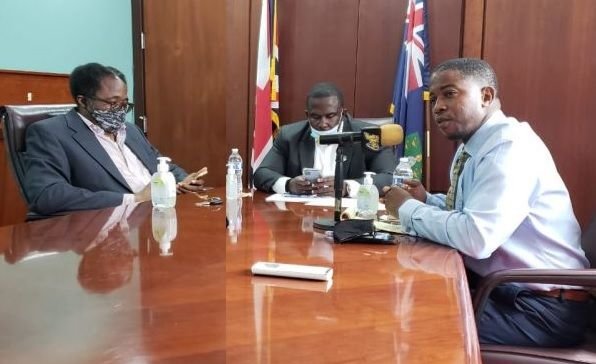 Premier and Minister of Finance, Hon Andrew A. Fahie has blasted Opposition Members for what he called mischief and spreading misinformation, following an Opposition press briefing where comments were made about an alleged antagonistic relationship between the Fahie Administration and the Governor.

Speaking on Wednesday, August 26, 2020, Opposition Leader, Hon Marlon A. Penn (R8) had told the media that he was concerned about the dialogue between the Premier and the Governor, Mr Augustus J.U. Jaspert.

"This in itself is not healthy, it creates divisiveness in a time when we need more than ever unity, as it relates to tackling the issue of COVID-19... a Global Pandemic," Hon Penn said.

However, while Hon Penn did not specify what dialogue he was referring to, he said the COVID-19 era is a time when the Territory needs global partners and the Governor and Premier should sit down and chart a way forward.

"Someone needs to be the adult in the room, let us sit down and figure out a way forward in this Territory," he said.

Hon Penn also suggested that the Governor and the Premier should put their differences aside and decide the best possible solution for the Territory.

Meanwhile, Third District Representative Hon Julian Fraser RA (R3) hinted that the COVID-19 update on Monday, August 25, 2020, was delayed due to a 'fight' which resulted in the delayed presentation from Hon Carvin Malone (AL), some minutes to midnight.

Premier and Minister of Finance, Hon Andrew A. Fahie (R1) has blasted Opposition Members for what he called mischief and spreading misinformation, following an Opposition press briefing where comments were made about an alleged antagonistic relationship between the Fahie Administration and the Governor.

Governor of the Virgin Islands Augustus J. U. Jaspert. Premier Andrew A. Fahie has said he has no beef with Mr Jaspert.

"It is unfortunate that in the midst of having to manage the many complex issues and situations relative to the impact of the COVID-19 pandemic on the BVI, that I have to divert attention and focus to correct misinformation, mis-statements and mischief," Premier Fahie said in his Thursday, August 28, 2020, media statement.

"But I cannot let these untrue statements that are being circulated remain unanswered and to bury their roots in the public domain. I also must state that I am disappointed that some members of Her Majesty’s Loyal Opposition are making deliberate efforts to fan these flames of misinformation, mis-statements and mischief, during this time of COVID-19," he said.

Hon Fraser had further suggested to the media that the Government's COVID-19 updates were not being presented by the Premier, Governor and Health Minister as a result of the same infighting.

"Most of you would recall... that those press conferences... it was all three people there. The Premier, the Governor and the Minister responsible for the subject. I know a little bit more about those three people but I wouldn't say it."

Disagreements not a fight - Premier Fahie

Hon Fahie hinted that while Cabinet meetings may have disagreements, there are no fights. "While the Government and the Opposition do not agree...we do not characterise these disagreements as a fight."

"Why then, are persons going out of their way to paint similar disagreements between the Governor and the Premier as a fight? Why are they trying to create fear, uncertainty and panic in the minds of the public?" he questioned.

According to Premier Fahie, "for the record, as Premier, I have a good relationship with the Cabinet Members of the Territory which includes the Governor, the Cabinet Secretary, the Attorney General and all my Ministers."