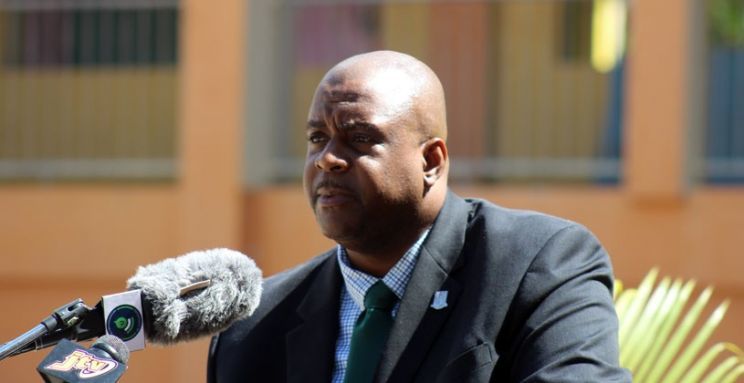 Premier and Minister for Finance Hon. Andrew Fahie said his administration has kept true to their promise and has approved an allowance and additional staff for the Customs Department.
Premier Fahie said on Friday, March 6 during the launch of MV Searcher at the Marine Base in Fort Burt that the officers deserve the funds.

“Customs Officers you deserve the credit along with the other members of the joint task force, and I bring you good news and great tidings today. The allowance that was promised has been approved by the Cabinet on Wednesday, and you will be getting that allowance very, very, shortly,” he said.

The Premier added, “So you wouldn’t have to use the Searcher, neither the police nor Customs and Immigration to come to search by the Minister of Finance for the money. It is now there. In addition, I bring good news for Customs, that the six recruits are now at the HR Department just waiting for final approval that will be working on the Searcher, so you would have even more help to search.

The Premier pointed out that for the majority of the COVID-19 pandemic in 2020, it was the local agencies - the Royal Virgin Islands Police Force, Her Majesty’s Customs, and the Immigration Department that provided for and met the Virgin Islands security needs.

“When COVID-19 struck, team, you had to work with what you had in your hand and using the limited resources that you had, you worked night and day to secure our borders and to clamp down on attempts at illegal entry, human smuggling and smuggling of illicit items such as drugs,” he remarked.

Premier Fahie added, “Your work has been remarkable, and your track record has been near perfect. The challenges you face are not dissimilar to what other countries are facing. Some persons have tried and will continue to try to define your performance by one or two instances where you may have come up just below the mark, but some totally ignored your successes which far outweigh the gaps.”

In 2019, then Acting Commissioner of Her Majesty’s Customs Leslie Lettsome during the Standing Finance Committee deliberations that notwithstanding the fact that the department was able to bypass its $27 million target in 2018 for revenue collection by earning over $43 million and a $1.7 million the environmental levy, the department had not seen an increase in salaries since 2007 despite an agreement with the VIP government.
#COVID-19  #Covid  #Fahie  #the Virgin Islands
Add Comment