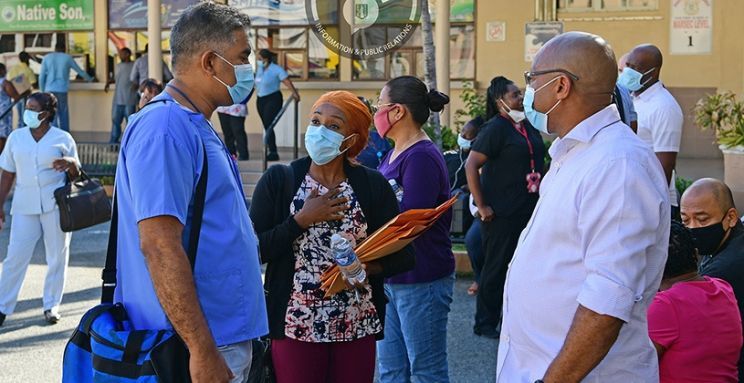 National Epidemiologist Harmonie Massiah has warned residents in the British Virgin Islands that the evident relaxing of the public health measures being seen in the territory could lead to a COVID-19 outbreak.
“In the BVI, due to the exhaustive, multi-layered COVID-19 management system has managed to stay off severe outbreaks to date,” she remarked during a live interview with GIS yesterday," Massiah stated.

She added, “But with the noticeable relaxed public health measures because we have actually seen a decline in persons wearing their masks, persons hand-washing, the physical distancing, and the increase influx of persons in the country, it is only a matter of time, especially with these circulating variants and our low vaccination rates that we have an outbreak.”

Massiah shared that as of May 23, 16,759 doses of the vaccine were administered in the territory, and approximately 11,648 were first dose vaccinations.

According to Messiah, the aforementioned figures could be an underestimation because we had a number of persons from the territory who went abroad and got vaccinations from other brands like Johnson and Johnson.

“Also the baseline population we used to calculate these figures might be an overestimation; we really don’t know how many people we have in the population since Irma.”

She further said, of the reported side effects, they were mild, and the most prevalent being achy feelings, headache, chills, fatigue, pain and itching at the injection site.

“We have not to date have any reported cases of severe disease, and we are asking the community, if you have had any rare side effects like diarrhoea, vomiting, blood clots, please report to Public Health so that we can then come back again and inform the public so that they can be further educated,” she added.
#COVID-19  #Johnson  #vaccine  #Covid
Add Comment