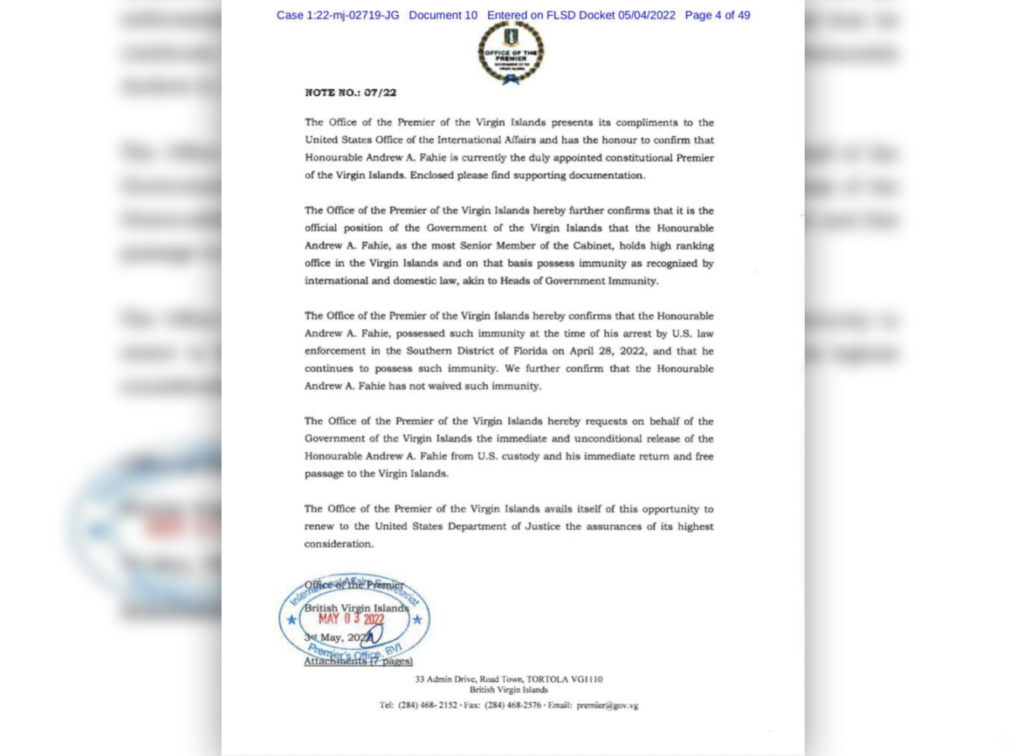 A widely circulated letter that purports to endorse Premier Andrew Fahie’s notice to the United States (US) courts that he is immune from arrest and prosecution has been disavowed entirely by Acting Premier Dr Natalio Wheatley.

The letter, which is dated May 3 — which bears the letterhead of the Office of the Premier and is stamped by the International Affairs Secretariat — not only endorses the Premier’s argument for diplomatic immunity but also requests his immediate and unconditional release from US custody.

That immunity argument put forward by his attorney Theresa Van Vliet has since been shot down by US Attorney’s Office.

Dr Wheatley said he was in the House of Assembly at the time the letter was issued yesterday while the Permanent Secretary for the Office of the Premier, Dr Carolyn O’Neal Morton, was at her desk attending to her normal duties.

Rogue public officer to be investigated

He said they were therefore both unaware of the correspondence and blamed it on a “rogue public officer”.

“It appears that the preparation and sending out of the correspondence were the actions of a rogue public officer who acted without authorisation or the knowledge of myself as Acting Premier or the Permanent Secretary,” Dr Wheatley said in an emergency statement aired on radio and on the government’s official Facebook page.

The Acting Premier said the content of the letter regarding diplomatic immunity for Premier Fahie “does not reflect the position of the Premier’s Office or the government of the Virgin Islands”.

In the meantime, Dr Wheatley said Dr O’Neal Morton is currently engaged with the Deputy Governor, David Archer to have the matter immediately investigated and addressed without delay.

He said Governor John Rankin has also been apprised of the situation and the governor has assured that he will act immediately.