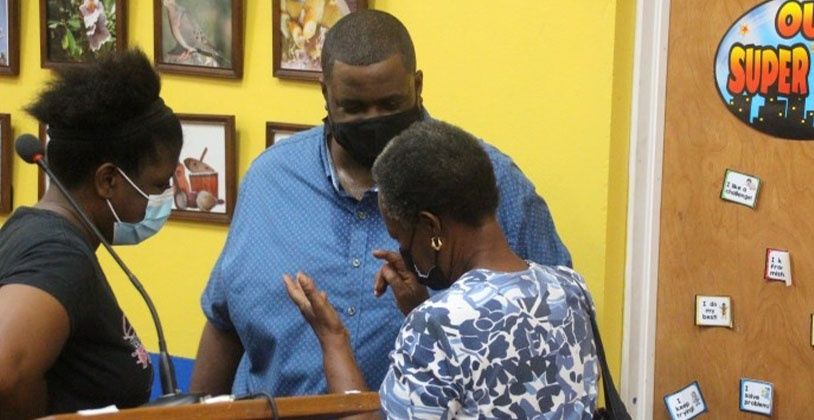 Minister for Transportation, Works and Utilities Hon. Kye Rymer has revealed that plans are well underway for a handful of major projects in the First District including the Carrot Bay/North Shore Sea Defence Project and a new Frenchman’s Cay Bridge.

He explained to residents of the western communities during a public meeting on Sunday, September 5, that $150,000 that was earmarked for the Huntums Ghut Bridge was channelled to the Frenchman’s Cay Bridge after concerns over the hazardous conditions of the bridge.

“So we directed the team at Public Works [to conduct] an assessment of the Huntums Ghut Bridge, and we saw that it was good enough for the moment, so we repurposed that funding, and we assigned it to this Frenchman’s Cay Bridge,” he revealed.

He said some of the works for this project has already been done, such as soil testing, and “we are now to this stage where the contractor should begin work sometime in the next few weeks.”

“The intent for the bridge is so that persons can still access their homes. We will start doing some piling and make sure we put in the first lane for the bridge and then demolish the other side so we can have continuity. I am quite excited about it,” he added.

Director of Projects Dr. Drexel Glasgow said the Frenchman’s Cay Bridge Project was tendered, and the contract is being finalized at this time.

This project is expected to last for three months and will likely commence in a few weeks’ time, Director of the Public Works Department Mr. Jeremy Hodge informed.

He said: “Cabinet also approved the works, but we will be doing it in phases. We will start from the Coal Pot [Restaurant in Carrot Bay]. I think we will be doing 400 plus feet of sea defence where we will be adding rocks and various things so that we will have a better protection. I think those works should begin in the last quarter of this year, hopefully, it can be sooner.”

Director of the Public Works Department Mr. Hodge said the project is costing just under $1.5 million for the first phase and will include about 10 feet of additional road space.

Meanwhile, Deputy Premier and Minister for Education Dr. Natalio Wheatley said monies have been allotted for the Isabella Morris School that will be transformed into a junior secondary school.

The new school will be targeting students from West End and environs as well as Jost Van Dyke.

He informed residents that the school has to be demolished and moved further inland, and a new location has already been identified. However, residents input would be sought every step of the way.

A brief update on the West End Ferry dock was also given.

The designs for that project is slated to be completed in the next six months, Premier and Minister for Finance Hon. Andrew Fahie, who is also the district representative for that area, stated.

The dock was closed to the travelling public almost two years following the devastation of the 2017 hurricanes.
A temporary structure was subsequently built to facilitate sea travellers in the interim.

In closing, Minister Rymer told residents that they should consider signing up if they want to take advantage of the aforementioned job opportunities.

“Persons who are interested in doing works need to sign up with the Ministry of Finance because what we did as a government is during this COVID-19 time we tried to make sure that we have economic activities for persons in the territory," he said.

The minister added, "so we amended the Financial Management Act where these projects would go to Finance, and we would be able to break it down into various work orders and contracts so that more persons would be able to get work."