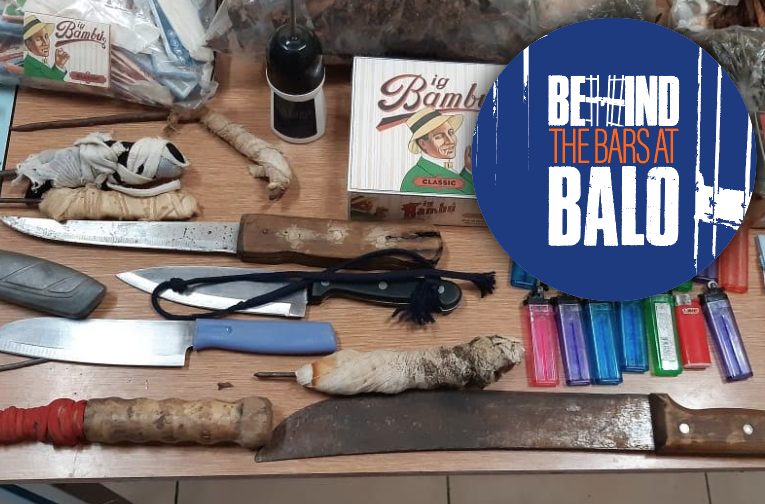 In series of searches of Her Majesty’s Prison throughout 2019, authorities undercovered dozens of contraband -several of which are so dangerous, they could be used to inflict potentially fatal chop and stab wounds.

Among those weapons were a machete with a blade 10 to 12 inches long, multiple knives, several pairs of scissors and a variety of what prison officials described as cell-made shanks.

The shanks at the prison are typically made from nails found around the property. Inmates then sharpen these nails and affix them to makeshift handles made from wood, cloth, and in at least one case -a roll-on deodorant bottle.

The list of contraband recovered was not limited to weapons and also include several dozen cellular phones and cellphone chargers, cigarette lighters, drugs, alcohol, wrapping paper, among other things.

“The type of contraband is varying. We would sometimes find weapons made in the facility … Sometimes we find jail-brewed alcohol because the inmates do make alcohol while in jail. We do get drugs of varying kinds, but the more predominant one is marijuana. We would get cigarettes, telephones and explicit magazines and other items,” Superintendent of Prison Vern Garde told BVI News.

The head of the Balsam Ghut-based facility also told BVI News that these types of contraband are not unique to the BVI prison. But, a major question that weighs on the mind is how were they smuggled into the BVI’s penitentiary in the first place.

“Some means are through body cavities and that is why when inmates come into the prison on the first occasion, we do a strip and body search,” Garde explained.

“The dynamics are so complex that we have to be very creative if we have to fight against the contraband. But, all in all, we do a very good job of lessening the amount of contraband in the facility. Contraband is always a major issue in this and any other jail. Of course, we would like to be in some sort of a utopia where best practices are done involuntarily, but this is not how the world works. So that continues to be a major challenge, and we are working to counteract it,” Garde further reasoned.

With the items found in what the prison boss describes as a routine ‘sanitisation operation’, an investigation is then launched.

The bulk of the recovered contraband is then destroyed.

“Those that can lead to further charges we would keep them as exhibits, and those that don’t, we will log them and then destroy them. So we are this week going to exhibit, log and destroy all those items.”

Persons, including prison officers who are caught smuggling items into the prison, are dealt with via various means, including a non-renewal of their employment contract and by the law.

Behind the Bars at Balo is a BVI News short-series that gives a closer look into the inner-workings of the Her Majesty’s Prison in Balsam Ghut. The news feature series seeks to explore inmate-life, prison operations, rehabilitative programmes, among other things.
Add Comment