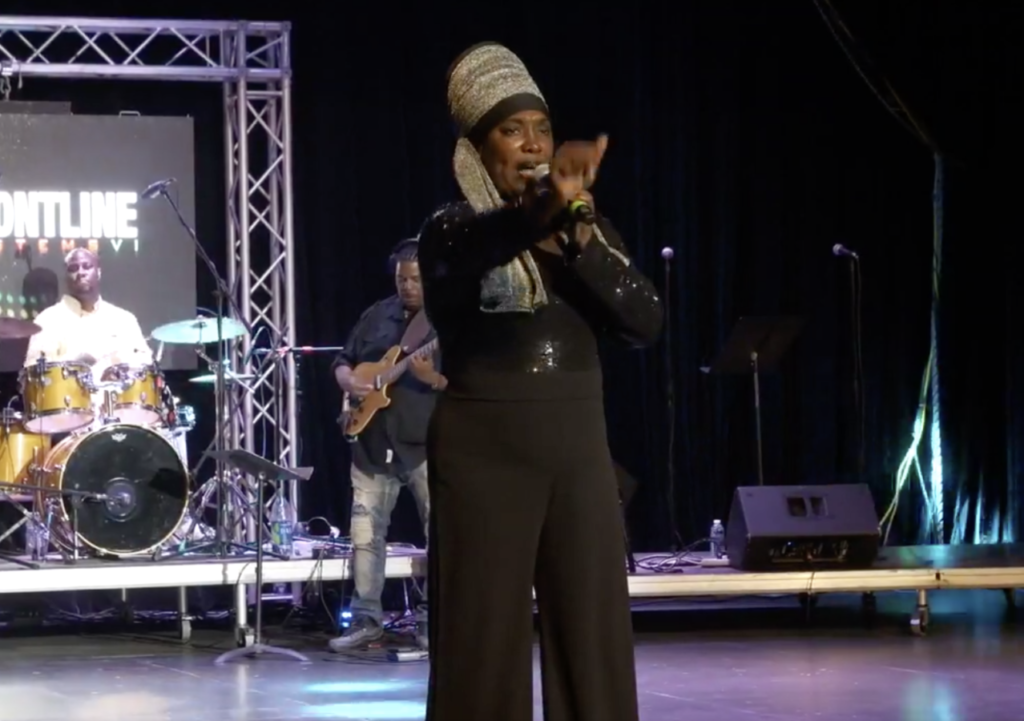 Veteran calypsonian Joycelyn ‘Sistah Joyce’ Searles held nothing back in her critique of the sitting administration while delivering what could be described as a powerful performance during the Kings & Queens of Calypso Virtual Review Tuesday night, August 4.

The former Calypso Monarch started with the lack of support from government ministers at the virtual event.

She said she was disappointed that when she hit the stage as the final act for the night, Minister for Culture Dr Natalio Wheatley was not visibly present.

“If he ain’t here, he gonna get it along with the rest of them who ain’t even got the decency. I don’t care if y’all home watching. At least one or two of you all could come out here, practice your social distancing and support this calypso event,” the entertainer said.

She continued: “Y’all ought to be ashamed of y’all selves, and y’all don’t text my phone explaining nothing. It’s quite okay.”

“I am proud to say tonight, without any apology, Myron Walwyn, he is still my Honorable. When the NDP was in power, he never miss a calypso competition or nothing,” the calypsonian added.

Towards the end of her performance, however, Sistah Joyce acknowledged Dr Wheatley and thanked him for coming.

She then sang one of her orginal songs, ‘Wha You Bawlin Fah?’

In the song, she mentioned Immigration Minister Vincent Wheatley and blasted him for the recent policy that expats who became unemployed because of COVID-19 should leave the territory.

She said: “Yes, we are going through this COVID-19 era and I do agree that some folks would have to go home until things pick back up in our country. But just to get up without any good governance or any good thinking and ask them to go, knowing full well we have some witless employers out there who owe the people them their money, who they going to get it? Wha you bawlin fah? Take your licks and shut up, ah we put them there!”

Don’t hang your hat too high

The calypsonian then turned to her other song, ‘Don’t Hang Your Heart Where Your Hands Cannot Reach’. This time, the some of the lyrics were directed to Premier Andrew Fahie.

“Don’t take it personally, my brother. It’s an advice from someone who did not graduate from school, but me full ah common sense and a degree in ‘streetology’.”

“I glad I never, never, ever, ever trust some black people, oh no, like them who try to convince me to sing about Tourist Board and Sharon Flax story. Is pure mix up they want to put me in, but is respect side I taking. The board needs serious overhauling. You see, some act high and mighty position riding them like a horse jockey and some of them fake smiling like they agree with what Andrew doing. But deep down in their belly is only sh*t and a lot of jealousy,” Sistah Joyce sang.

She continued: “So Andrew don’t join the crew, monkey see, monkey do. The things you wanted NDP to do, now you got the chance. Stand up strong before we have to drain your swamp too. Don’t hang you heart where your hand can’t reach it, Mr Premier, don’t do it, otherwise, we are going to drain the swamp too.”

She went on to describe the Premier as an educated and great man but urged him to ‘steer his ship’.

“And if you have to bring the ship to a haul and throw them all out for the betterment of our country, I am with you. I born here!”

Other calypsonians who performed were Shereen ‘Queen Shereen’ Flax-Charles, King Paido, among other acts in the roughly three-and-a-half hour-long virtual event.