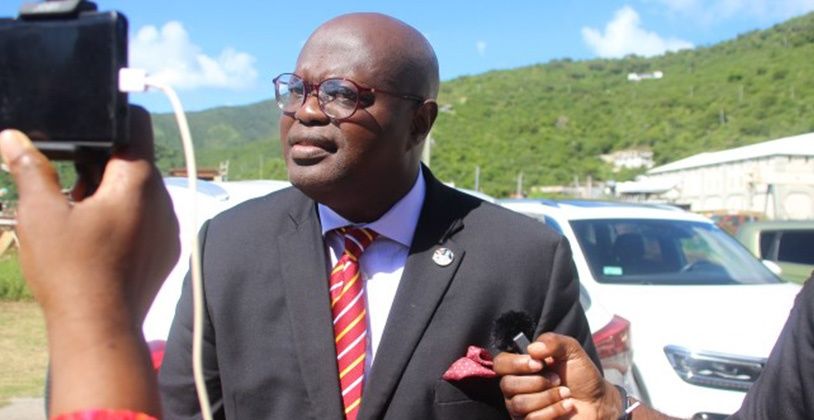 In a letter addressed to Governor John Rankin, Speaker of the House of Assembly, Hon. Julian Willock, detailed some of his grievances with how the dissemination of the Commission of Inquiry (CoI) report is to be handled, given the Governor’s press release on April 21, 2022.
The first disappointing point the Speaker highlighted was the timeline in which the Commission of Inquiry (CoI) report would be issued.

The Speaker expressed in his letter, seen by BVI Platinum News, that in his 'measured view' both the Premier and the Leader of the Opposition should have been given a copy at the same time [the Governor] received the report.

He disagreed with the hierarchy outlined whereby the Governor, who was the first in line to receive the report, will thereafter share it with Premier and Minister of Finance, Hon. Andrew Fahie, in confidence.

The Governor indicated in his second statement on the CoI report, “I intend to share it first in confidence with the Honourable Premier Fahie, and then the leaders of political parties represented in the House of Assembly, to allow for discussions to take place on a cross-party basis between them, Ministers in the UK, and myself. I trust that the confidence in which the Report is shared will be respected.”

However, Hon. Willock also pointed to the constitutional provision to justify why it was not only appropriate but necessary for him, in his capacity as the Speaker of the House, to have been selected among other public officials to receive a copy of the highly anticipated CoI report.

“Governor, you will appreciate that there are three co-equal branches of Government (Legislative, Executive and Judicial), and the Speaker is the head of the Legislative Branch”. He went on to admonish the Governor for blatantly disregarding the Office of the Speaker, and by extension, questioned the process used to determine who gets access to the report, when and in what order," the Speaker stated.

He added, “It is therefore concerning that nowhere in your statement of 21st April, 2022, you mentioned sharing a copy with the Speaker.”

For this reason, he also suggested that he is inclined to believe that it was perhaps an oversight on the Governor’s part, in not mentioning that the Speaker will receive a copy of the report.

Further, the Speaker detailed that it was still unclear whether the Judicial Branch of Government will have official access to the report, as an arm of government.

Hon. Willock questioned this on the premise that the Judicial Branch is a critical component in safeguarding justice and the rule of law. He strongly suggested that this Branch of Government should be actively involved in any serious national discussions on corruption and mismanagement of the territory’s affairs.

On this point, the Speaker challenged the Governor by stating, “You have made public statements about your commitment to ‘Good Governance’, which also means upholding the rule of law’’, suggesting emphatically that the Governor should have included the Judiciary in a decisive way.

He noted that while he acknowledges and respects the authority of the Governor, he simultaneously disapproves strongly with the distribution timetable since it implies that the public and the press will be last to access to report, which is in contention with the principles of integrity which the Governor claims to embrace.

"Your statement on when the CoI report will be shared presupposes that the local political class and “Ministers in the UK” have more of an interest than the ordinary residents, civil society, captains of industry and other professionals who were called to give evidence before the Commission,” Hon. Willock stated.

Owing to this, he urges the governor to right his wrong in relation to the timetable and hierarchy of distribution of the CoI report.

In his last press statement, the Governor emphasized that his objective is to act in the best interest of the people of the Virgin Islands. The Governor also noted that “there may be speculation and attempts to discredit or second-guess the COI Report and recommendations. I ask you to reserve judgement until it is published”.
#Commission of Inquiry  #the Virgin Islands  #John Rankin  #Fahie  #CoI
Add Comment