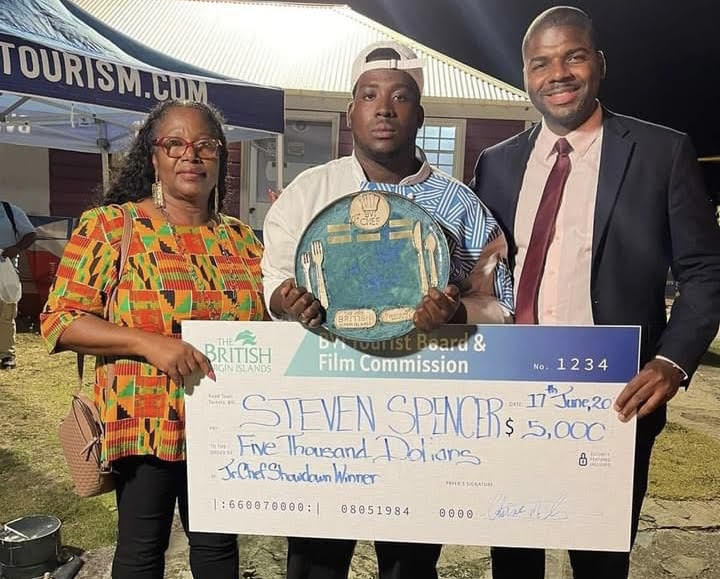 With the BVI Junior Chef Competition drawing the curtains on the territory’s celebration of Junior Tourism Week last Friday, Chef Steven Spencer was crowned the eighth winner of the competition.

This year’s Junior Chef showdown took the form of a series of culinary-themed challenges whereby chefs presented to a panel of judges who then critiqued and selected the best dishes.

The reality series, called Beyond the Plate, followed the six junior chefs – Aszeke Oliver, Cinique Henry, Rakesheah Young, Kavon Kissnasammy, Liliana Rymer and Steven Spencer – as they are presented with their themed challenges.

The final showdown at Crafts Alive Village saw Aszke Oliver, Kavon Kissnasammy and Steven Spencer battling for the title of 2022 Junior Chef Champion along with $5,000 cash prize and a Bamboushay pottery trophy.

Spencer was deemed the winner of the final showdown after his chicken liver stir-fry with seasoned rice and vegetables got the most points from the judges among the three finalists. Kissnasammy finished second while Oliver finished third.

The young chef said he was overwhelmed by the victory but most importantly, he felt proud of his accomplishment.

“I am feeling very good. The important thing I learned is no matter who you are, put it in your food and don’t change for anybody because to be honest, a lot of people will try to change you. But once you put your heart into your food, no matter the outcome, you will always uplift and touch someone’s heart. That is what I learnt,” Spencer said.

The young chef also noted the competition opened his eyes and he now knows he still has a lot to learn if he wants to become a top chef in the industry.

Meanwhile, Premier and Minister for Tourism Dr Natalio Wheatley commended all the participants in this year’s Junior Tourism Week competitions and encouraged them to continue in tourism as it is a main economic driver for the territory.

“Of course, this is one of the signature events that is celebrated during junior tourism week 2022, which has occurred over the past few days. The two other major events which occurred during the run-up to this event were the Junior Ambassador competition in which Miss Desha Skelton was crowned the winner on June 14, and the BVI Tablescaping Junior competition where Mr Deshaun DaSilva and Miss Beyonce Moore both won the Janice Nibbs-Blyden Trophy For Excellence in table-setting and Miss Trishelle Dawson was judged the BVI Tablescaping Junior Champion. I want to say congratulations to all our winners, but I want to say congratulations to all our participants and finalists in the three Junior Tourism Week competitions,” Dr Wheatley said.

“Regardless of how you place in the competition, you are extremely talented. You represent the cream of the crop in your fields, and you give us confidence that our tourism industry is and will be in good hands. The Virgin Islands is one of the premier destinations in the region and the world, and our expectations are high. Our standards are high, and you all embody these high standards. As you continue to pursue your passion for your respective talents in tourism, you are ambassadors for our Virgin Islands. As for the junior chef competition, we started out with eight talented junior chefs and now we are down to the final three. Again, what we have is international-level talent. Trust me when I say we are all inspired,” the Tourism Minister added.