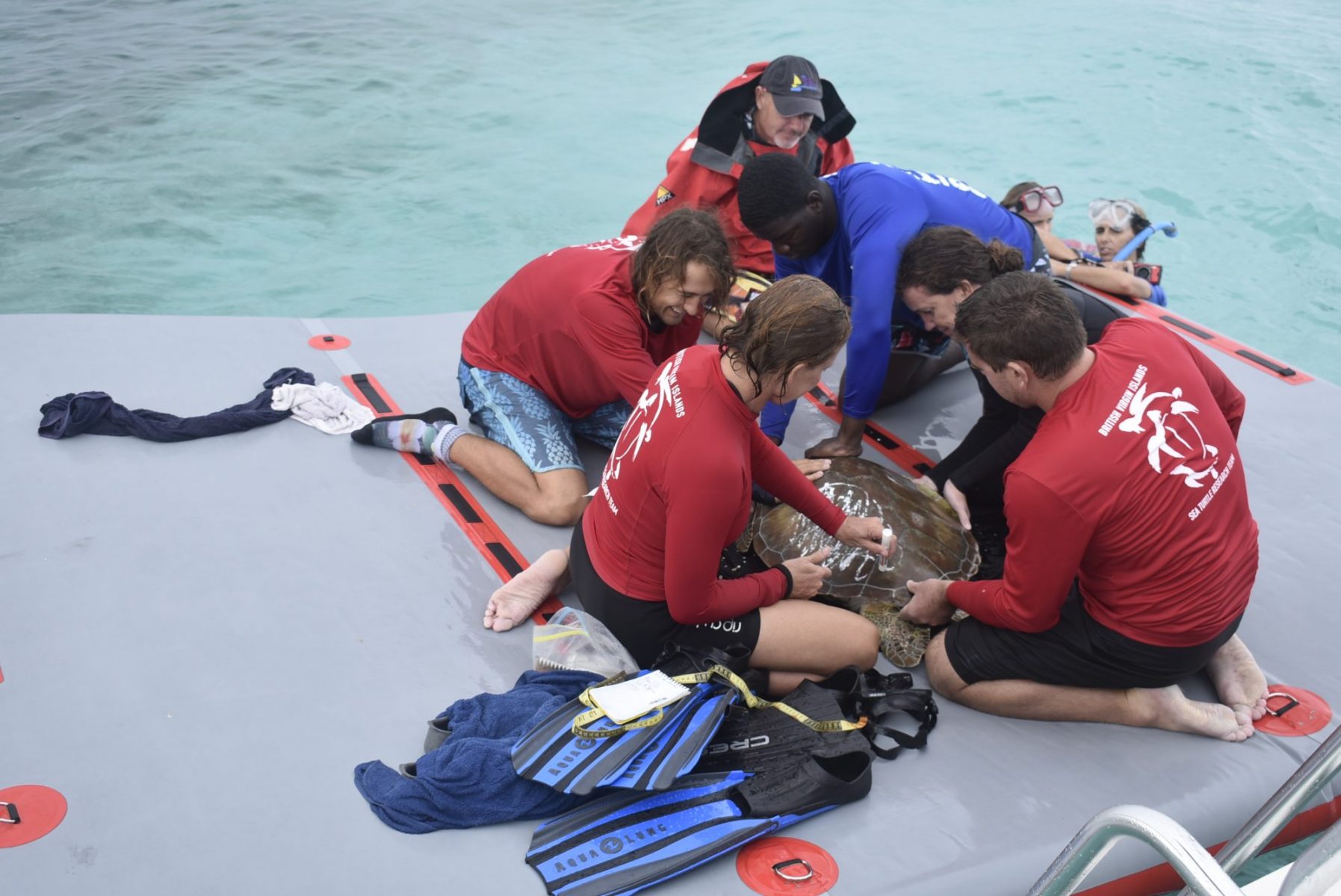 Changing course, Mr. Anderson followed this turtle for about ten minutes until reaching the shallows.

“I could tell it didn’t really see me, so I dived down, grabbed ahold of it and came up with it, … then had a nice long swim back,” Mr. Anderson said.

After he brought the turtle over to the “lily pad” — an inflatable rectangular pad that biologist Dr. Shannon Gore uses as a sort of field laboratory — Dr. Gore checked the turtle for any defects or diseases, measured its shell, tagged one of its flippers, and injected it with a microchip so that she could track its movements throughout the Caribbean.

Dr. Gore, managing director of the Association of Reef Keepers, has been studying turtles in the Virgin Islands and compiling her findings for about two decades.

Now, after recently winning a £241,553 grant from the Darwin Initiative, a United Kingdom-based programme that provides funding and academic support for biodiversity research, she is working to establish a national sea turtle database. 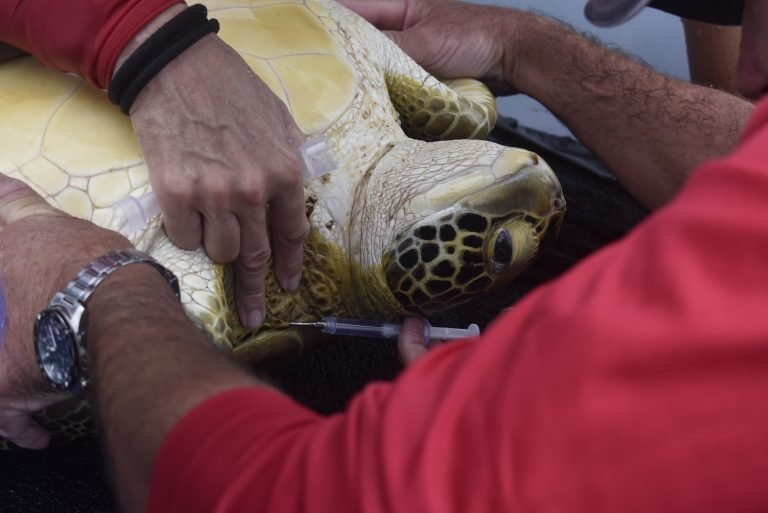 In Oil Nut Bay, Dr. Gore and volunteers with ARK tagged three green turtles so that they could track their movements throughout the Caribbean.

As part of the Sustaining Turtles, Environment, Economies and Livelihoods project, which was officially launched on Oct. 26 and is funded with money from the grant, Dr. Gore is planning on visiting six to eight sites twice a year.

By the end of the effort, she should have a clearer picture of the prevalence and growth rate of VI turtles and other information that she hopes will have a lasting impact on the management of the territory’s turtle population.

According to the biologist, there are strong opposing views in the territory about the best approach to protecting turtles, with some proposing to close the turtle fishery entirely and others arguing that it is possible to catch them while preserving the population.

Currently, a turtle “open season” runs from Dec. 1 until March 31, though fishers need a fishing licence and registered vessel to participate, and only hawksbill and green turtles can be killed, Dr. Gore said.

To find common ground on the issue, Dr. Gore and other researchers will be employing the “community voice method,” an approach where project leaders interview people with differing opinions about a topic, and then enter the transcriptions of these interviews into a software programme that categorises and examines the viewpoints that emerge.

UK researchers are expected to travel to the VI in January to conduct interviews for the project, and they will eventually use recordings from the interviews in a documentary that lays out all sides of the argument, Dr. Gore said, adding that they tentatively plan to start filming in April.

“This will kind of put it in a perspective that it’s non-threatening to either side,” she explained. 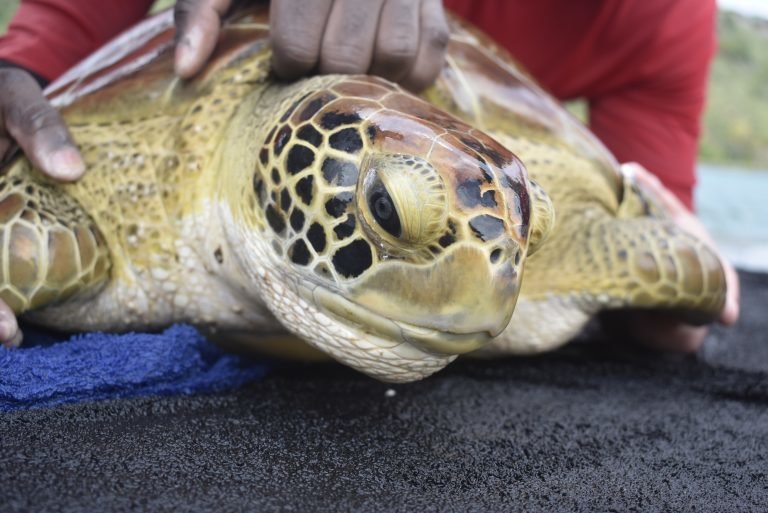 As part of the STEEL project, researchers from the United Kingdom will create a documentary that will lay out all sides of the argument for how to best preserve VI turtles.

Despite the boost in funding and academic support that comes with a grant from the Darwin Initiative, Dr. Gore’s turtle-tagging mission, like many aspects of life in the VI, has been upended by the coronavirus pandemic.

In prior years, this work was funded largely by a programme called Turtle Encounters, which allowed tourists to participate in ARK’s scientific efforts and try their hand at tagging a turtle. Fees from the programme helped Dr. Gore charter boats for the expeditions, and whatever was left over went back into ARK’s operational budget, she said.

With tourism halted for the past eight months, getting back onto the water has been a challenge, with Dr. Gore relying on the generosity of boat owners like Gary Cottreau of Kuralu Charters, who offered Dr. Gore and her team of volunteers, as well as some of his friends, a free ride to Oil Nut Bay on a recent Sunday.

Though the crew included about 15 people, from children to adults and lawyers to sailors, tagging turtles is no easy feat, and Dr. Gore and the two professional divers on board were the only ones to successfully catch any.

Turtles are strong swimmers and feisty when bothered, with rows of sharp teeth that make the placement of one’s hands on their shell extremely important.

Because they are so quick, they often have to be stalked for some time, and it is best to attempt to wrangle them when they have paused to feed, at which point someone dives down, grabs hold of their shell in a way that is safe for both human and reptile, and then swims them up to the “lily pad.” 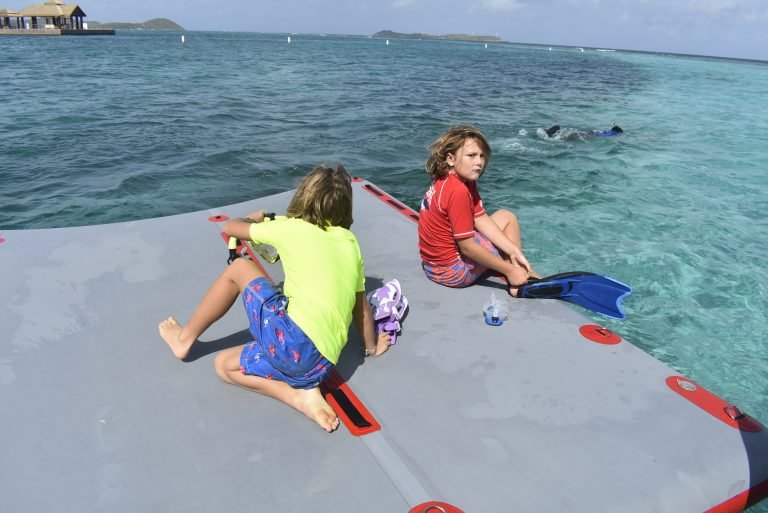 Dr. Gore’s crew to Oil Nut Bay included everyone from children to lawyers, though only Dr. Gore and the professional divers on board were successful in catching the feisty turtles.

In the five hours that the Kuralu Too was anchored in Oil Nut Bay, only three turtles were tagged.

“It’s a scary process but an exciting process, and a process where you’ve got to be on your A-game for those turtles,” said Shaquille Lewis, a student at H. Lavity Stoutt Community College who accompanied Dr. Gore for his first tagging trip.

Mr. Lewis became interested in studying turtles after helping to care for one at the college that is infected with fibropapillomatosis, a rare disease that causes tumours that in severe cases can obstruct a turtle’s mouth and prove fatal.

Eager for a challenge and intrigued about turtles and other marine species, Mr. Lewis decided to jump on the opportunity to come tagging.

Daunting as it is to try to catch the turtles, Mr. Lewis said he enjoyed the adventure and welcomes the opportunity to learn about ocean life, and he plans on continuing to help with ARK’s mission.

“I really like turtles,” he said, adding, “My close interactions with the one at the college made me want to explore more.” 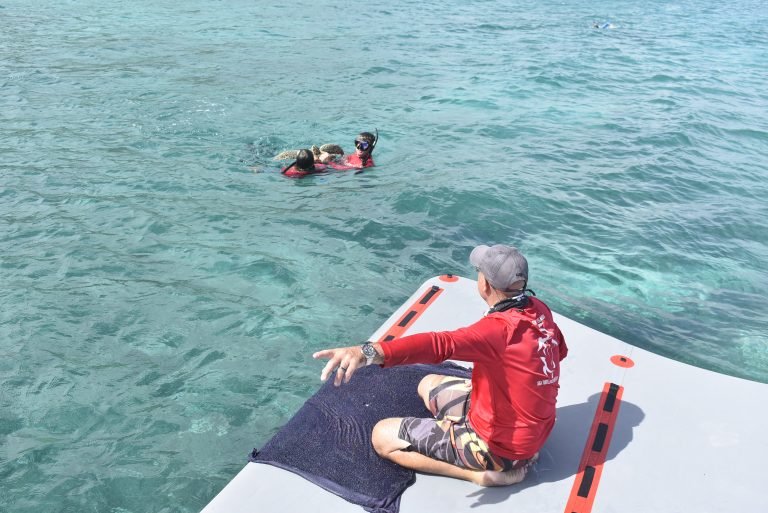 Matt Anderson and another instructor at Sail Caribbean Divers bring a turtle over to the “lilypad” so Dr. Gore can inspect and tag the turtle.