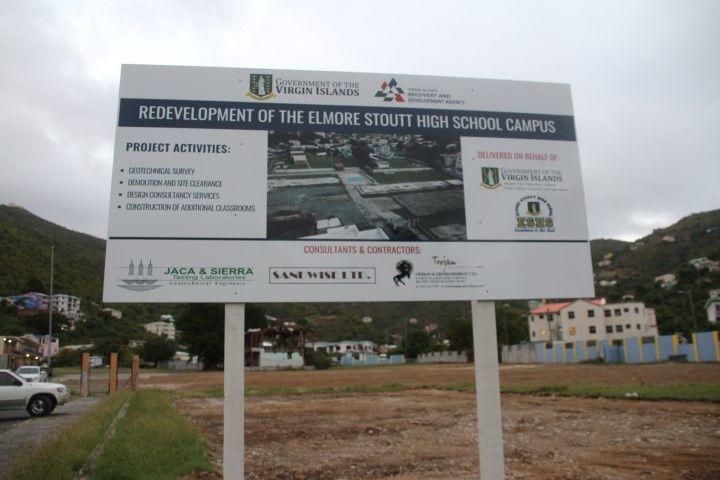 Premier and Minister of Finance, Hon. Andrew Fahie has confirmed that the redevelopment of the Elmore Stoutt High SChool is proceeding as planned with the tender expected to be released today, February 7.
"Tomorrow [February 7, 2022] the tenders are going out from the RDA for the Elmore Stoutt high school project so all contractors that pre-qualify sharpen your tools and let's get that project going because by September we will be opening the doors for those children to come," Premier Fahie told a community meeting last evening, February 6.

Just over a week ago, Hon. Andrew Fahie has pointedly told opponents of the current redevelopment plans to save their energy as no one will distract the Government from completing the project.

The Premier comments were made while he presented his report to residents of the First District at Cappoon's Bay on January 29.

"Recently we broke ground for the expansion of the Elmore Stoutt High School campus where more buildings for classrooms and other activities will be built so that our students and teachers can return home on the Elmore Stoutt High School campus. And may I state loud and clear that it is time for our teachers and students to come home and no one will distract this Government from accomplishing this task on behalf of the people of the Virgin Islands so save your energy," Hon. Fahie has stated.

Former Education Minister, Myron Walwyn, has publicly called on Government to utilise portions of a previous plan which he referred to as being 'state-of-the-art' for the redevelopment of the ESHS campus. The Virgin Islands Party (VIP) administration is at odds with the previous redevelopment plans and this prompted Walwyn to share the previous schematic plans with residents.

"We will only have one chance to re-develop ESHS in a manner that provides the best learning environment for our children. Let us put down the politics and deliver something that we can be proud of," Walwyn stated.

According to Walwyn, the previous plan was approved by the Caribbean Development Bank in 2017 which included a state of the art auditorium/ gymnasium/ cafeteria, state of the art science labs etc, classrooms outfitted with smart boards and other technological learning devices, teachers’ lounge, training rooms etc.

Hon. Fahie has reminded residents that it was the Virgin Islands Party (VIP) administration that completed the L-Shape building, now renamed in honour of veteran educator L. Adorothy Turnbull, on the ESHS campus within months of taking up office in February 2019. According to the Premier, this was done despite persons saying it could not be done.

He shared that As part of the Government's plan, a section of the ESHS campus will be allocated to house a junior high school. This, Hon. Fahie stated, will be a separate building from the others that are about to be constructed. He stated that the junior high school will be for the children of the central part of Tortola.

According to Hon. Fahie, designs are being worked on through the RDA so persons can give their input on it very soon.

"On Virgin Gorda, we have been working with the private contributors and donors to restore and expand the secondary division of the Bregado Flax Educational Centre. We upgraded a number of other schools including the Jost Van Dyke Primary school with the new school going for tender soon," Hon. Fahie disclosed.
#the Virgin Islands  #Fahie
Add Comment