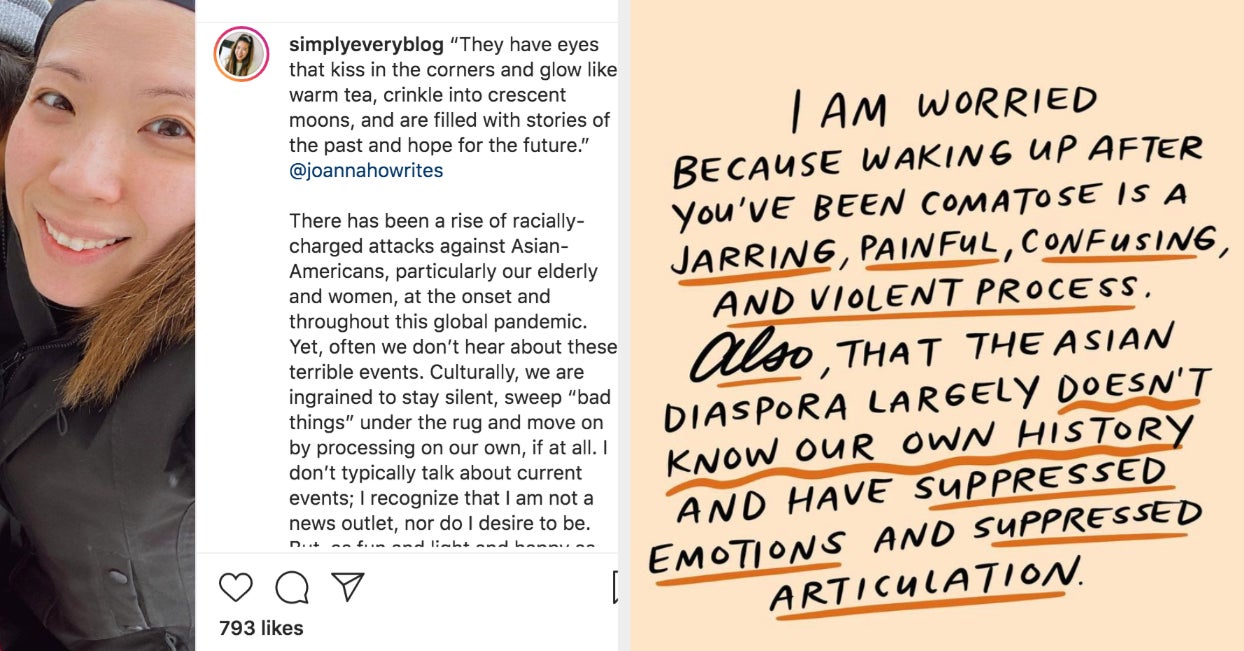 In this week's newsletter: Asian American influencers and online community-builders are confronting difficult identity issues after the recent string of racist attacks.

In June of 2020, following the police killing of George Floyd, Jocelyn Chung’s infographic explaining the harmful impact of the “model minority myth” on Asian Americans and Pacific Islander Americans went megaviral on Instagram. It got over 46,000 likes and half a million shares.

Earlier this month, Chung’s poetic tribute to older Asian Americans, who’ve been the victims of a recent string of racist attacks, started taking off again. She said actor Gemma Chan had shared it at one point.

Chung, 24 and a full-time graphic designer, told me over the past year since she posted her first viral infographic, she’s gained about 9,000 new followers, with close to 4,000 of them following just in the past week.

She said Asian Americans in this country are finally examining the tricky and unique terrains we occupy racially in this country and finding our own voices to speak out on “emotional suppression.” (I’m going to use “we” and “our” in this newsletter to acknowledge how deeply personal this is to me, FYI.) She credits a lot of this momentum to the work Black Americans have done this past summer, and for decades, for their own racial justice.

“The door opening came from the more national reckoning,” Chung said about the George Floyd protests and online awareness campaigns. “The stage was set to open the conversation for Asian Americans to then understand and reflect on their own experiences, and our anti-Blackness during that time.”

For Asian Americans, that meant coming to terms with internalized racism and the white supremacy we may be perpetuating. Now, we are awakening to our own racial trauma and speaking about it.


She said the “huge change” she’s seen with her account @jocekittyllama as far as engagement speaks to a collective “grief and anger and dissonance” the Asian American community is processing. The horrifying attacks on older Asian adults — that are suspected to be tied to COVID-19 bigotry — have motivated younger Asian Americans to unpack their own repressed traumas in order to help move conversations and keep their elders safe.

“There are so many different experiences of what it means to be Asian American,” she said. But at the center of this moment is a “joining together of communities to combat the biggest enemy, which is racism and white supremacy.”

“I’m Taiwanese American, and we’ve been taught you must swallow your suffering. You endure it, you keep going, and don’t make a fuss,” said Chung. “In the duality of being Asian American, we hold together the idea of communal suffering, but we refuse to stay silent about it. We are here. Our experiences have mattered. The reality of our white adjacency is real.”

A theme throughout her work is that the identities of Asian Americans and Pacific Islander Americans are not a monolith. The conversation is only beginning online, and it can only make a real impact if people of diverse mindsets and experiences can also join in.

Major influencers like Chan and fashion maven Eva Chen have also been posting regularly about these recent hate crimes and how to be a good ally. Microinfluencer and mom blogger JeeYoung W., who has almost 60,000 followers on Instagram, shared a post earlier this month, writing, “Culturally we are ingrained to stay silent, sweep ‘bad things’ under the rug and move on by processing on our own, if at all … I don’t typically talk about current events.”

“But, as fun and light and happy as our space is here; it’d be a miss on my part, and not true to who I am at my core, if I don’t share the hard along with the joy,” she wrote in a long caption of a photo with her three young children. “My fervent prayer is that my Korean-American sons (and your sweet babes) will grow up in a world that not only recognizes their differences, but embraces them in kindness and in love.”

JeeYoung, who’s based in the metro Detroit area, told me because there are fewer Asian American influencers, she has always been aware of representation.

“I think that our community representation across the industry is lacking,” she said. “I don’t view myself as an activist or a news source, but it’s a natural extension of the platform I have because my identity and culture is ingrained into the things that I share with my audience.”

She’s also hoping that putting herself on such a public platform could teach her children that they can also “see themselves in these arenas” when they grow up.


This responsibility that JeeYoung takes on professionally and personally is integral for influencers who want to use their platforms effectively. It’s the constant ire of this newsletter; Stephanie and I pleading with people who have hundreds of thousands if not millions of followers to self-reflect and be brand ambassadors of good values. (To my “this is a free country” fist shakers who end up in my inbox, I understand it is not their duty to be this person; they are who they are. But wouldn’t it be great if they were this person? Wouldn’t it be great to imagine white influencers speak candidly and openly about racism and the role they play in a racist society?)

Chung believes social media should not be the main space for these conversations, but it’s a necessary place to start. For influencers, she wants them to be “connected to communities outside of the Instagram community.”

She said she herself has many mentors from a diversity of backgrounds and expertise who hold her accountable for her own growth.

“We are responsible for diversifying the narrative that’s happening,” she said. “Because posts go viral we in a lot of ways control the tone and narrative of what’s being shared on a wide platform. We also need to be kept in check, and make sure we are having a joint voice, that we are not doing rogue stuff on our own.”

“We are looking for long-term solutions and problem-solving rather than reactionary activism,” she said. For anyone with a large, public account, it’s paramount to be doing work on yourself as you’re doing work for a cause, she added.

“Go to therapy, have guidance, have community groups, be involved with organizations outside your social media bubble.”

Now that would be influential. 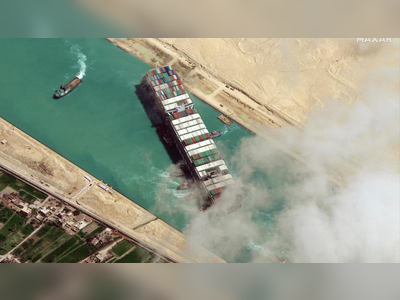 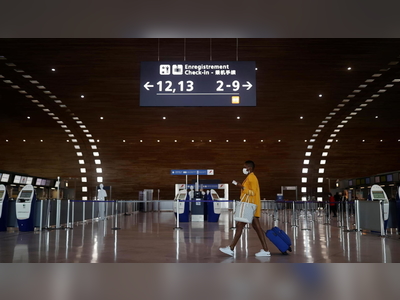 France said Tuesday it would suspend all flights to and from Brazil due to concerns over the spread of a potentially more contagious variant of the coronavirus causing Covid-19 ...