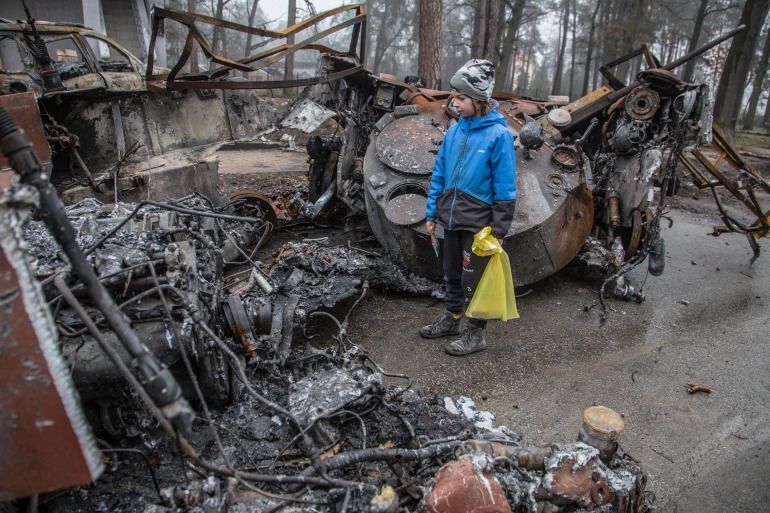 As Russian forces retreat from the area around Kyiv, the horrors of Moscow's invasion of Ukraine are increasingly coming to light. The death and destruction brought by Russia's war machine are on full display in Bucha, once an up-and-coming area on Kyiv's outskirts for young couples looking for relatively new housing developments, large lawns and good schools.
Survivor of alleged Russian atrocities recounts his ordeal as analysts say development marks wake-up call for Western powers.

“They were shelling all the time, around the clock, and all the shells flew over my house,” Oleh Matsenko, who survived 33 days of Russian attacks in Bucha, a once-tranquil town northwest of Kyiv, told Al Jazeera.

Speaking four days after Russian troops retreated, he said he was particularly frightened when a column of dozens of tanks and armoured vehicles slowly drove by – surrounded by infantrymen peeking into the doors and windows of the houses on his street.

“The column was so big that it took them about two hours to drive past my house,” he said.

Going out for food was a gamble, he said.

Some of his neighbours left their dark, cold houses that had no electricity, running water or natural gas supply to get bread or charge their mobile phones – but never came back.

One day, he went to a market that survived the shelling to get food for himself and several friends and neighbours who flocked to his house, which was warmed by a wooden stove.

His story confirms the scope of the mass killings of civilians that became evident – and visible – only after Ukrainian forces and journalists entered Bucha on March 31.

Russians sprayed bullets in all directions, firing at any movement in a street or a window, at anything warm they saw in their heat visors, said survivors, officials and the military.

They shot anyone who resisted their presence, interrogations and looting – or simply looked suspicious, they said.

Decomposing under the warming sun, the bodies of men, women and children were seen lying in the streets, sitting in the bullet-ridden, fire-damaged cars in which they tried to flee, according to photos, media reports and officials.

Several bodies were found inside apartments and houses with gaping holes made by shells and explosions. Some had their hands tied, some had traces of torture. Others were found in mass graves, barely covered with soil and garbage.

Bucha’s mayor reportedly said that hundreds of bodies have been found – and the count appears far from over.

“In Bucha, we have already buried 280 people in mass graves,” Anatoly Fedoruk told the AFP news agency on Saturday.

The bodies of 410 civilians were removed from Bucha, the neighbouring towns of Hostomel and Irpin and smaller villages around Kyiv, Ukraine’s Prosecutor General Iryna Venedyktova said on Sunday, April 3.

Russia rejected the findings and evidence.

The Russian Defence Ministry called them “another production of the Kyiv regime for the Western media”.

The ministry claimed on Sunday that all Bucha residents “had the opportunity to freely leave”, and claimed that the southern suburbs “were fired at around the clock by Ukrainian troops”.

Ukrainian intelligence claimed on Monday to have retrieved the names of all Russian servicemen from the 64th Motor Rifle Brigade, which seized Bucha and carried out the ostensible murders.

“Every Ukrainian should know their names!” the Main Department of Reconnaissance said on Monday.

Observers already compare the mass murders to the horrors of World War II – or the Yugoslavian wars of the early 1990s.

The only difference was that the Russians never collected the bodies of their own soldiers.

“The specifically Russian thing is that after a month of being in Hostomel, the Russian army never cared to send home or at least bury the bodies of Russian special forces who died in the first wave of landings,” Nikolay Mitrokhin, a Russia researcher with Germany’s Bremen University, told Al Jazeera.

The reported killings in Bucha and neighbouring suburbs have been compared to the 1995 massacre of some 8,000 Bosniak Muslims by ethnic Serbian militants in the town of Srebrenica.

Duped by the Kremlin’s announcements that said Ukraine needed to be “liberated” from neo-Nazis and ultra-nationalists, Russian troops found themselves among a “stormy sea” of hostile civilians, he said.

They resorted to killing adult males and raping women as the only way to “suppress resistance and achieve a collective nervous breakdown”, he said.

“[It was] physical and psychological destruction of a will to resist,” Kushch said.

To many in the West, the Bucha killings became a wake-up call, the first chance to see the scope of mass killings of civilians that amount to war crimes – or even genocide.

“The world cannot be tricked anymore; the spotlight is on Putin and his forces,” Ivar Dale, a senior policy adviser with the Norwegian Helsinki Committee, a human rights watchdog, told Al Jazeera.

He said he visited Bucha while living in Ukraine – and sees that “the level of evil is nearly incomprehensible”.

“We demand a thorough, international investigation and we demand justice for the victims of these war crimes,” he said.

Five days after its liberation, Bucha is still not safe – and has no power, water or gas supply.

“Just now, less than half an hour ago, there was a shake so strong that my house jumped up. But where it blew up – I don’t know, maybe, a [cruise] missile flew in,” Matsenko said on Monday.

“Something blew up, strongly, but just once.”


Ukrainian President Volodymyr Zelensky has blamed Russia for the killings and called on Moscow to put an end to the "war crimes."

"For these murders, for these tortures, for these arms torn off by explosions that lie on the streets. For shots in the back of the head of tied people. This is how the Russian state will now be perceived. This is your image," Zelensky said in a Sunday video address.
Add Comment