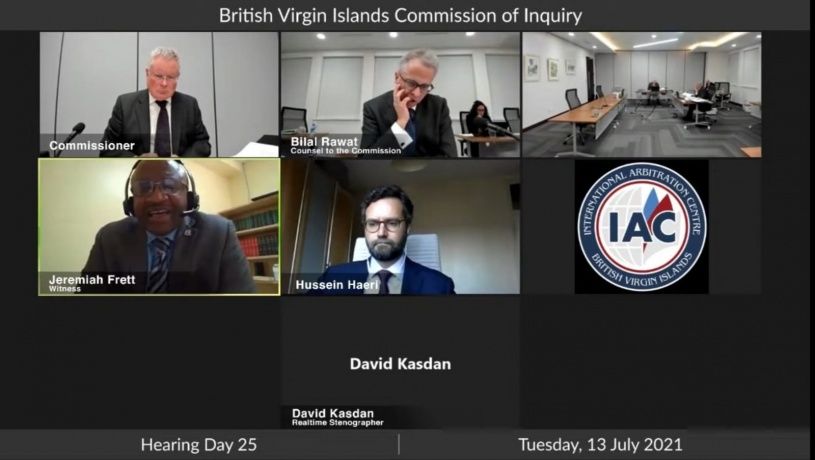 There Must Be A Reasonable Explanation - Acting FS On Stimulus Grant Info.

Acting Financial Secretary Jeremiah Frett has seemingly come to the defence of his counterparts in the Ministry of Finance against allegations that pertinent information on the COVID-19 stimulus grants was not provided in a timely manner or not at all to auditors stating that there must be a reasonable explanation to the matter.
Counsel to the Commission of Inquiry (CoI) Mr. Bilal Rawat said this was the evidence given by the Internal Auditor during her appearance before the CoI.

Mr. Rawat stated that the Internal Auditor also revealed that she was unable to provide monthly reports because of the lack of information.

Responding to his statements, during his appearance before the CoI yesterday, July 13, Mr. Frett said he was aware that the Internal Auditor wrote to the Ministry of Finance requesting that information as she was conducting a review of the programme.

“We, in turn, would have written to the Premier’s Office asking them to provide such information to the Internal Auditor to provide an update on the requested information. I did not have an opportunity to sit down with the Internal Auditor to go through her report, I was actually surprised that it made its way to the CoI without having that opportunity to discuss the content. I had to go on medical leave, and next thing I know, it is before the CoI,” he revealed.

He added, “In all fairness, I did not get an opportunity to discuss the content because it was in draft form, and secondly I was not able to have that dialogue with the Permanent Secretary prior, to say to her, this is the report.”

“I am not here to defend or anything like that, but I am just trying to clarify to say that there must be a reasonable explanation why the information to submit to the Internal Auditor was not presented and how can we rectify that going forward in the future, the timely submission of documents to the Internal Audit in order for them to execute. I know that we did follow up with the Ministry of Finance, and I do not see the Permanent Secretary willfully not providing that information.”

He, however pointed out that it would have been more prudent to have had a dialogue on the report before it was disseminated.

“In hindsight, maybe the communication between agencies could have been improved to avoid this current situation,” he said.
#COVID-19  #Covid  #CoI  #Commission of Inquiry
Add Comment